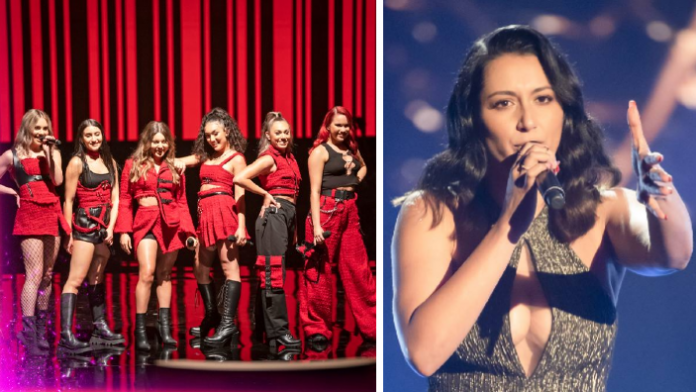 The ‘Knockouts’ round on The Voice Australia came to an end on Monday night and singing superstar, Rita Ora, took only two of her five team members through to the semi-finals of the singing competition.

Among those two into the semi-finals were Mateja Sardelis and her girl band, G-Nat!on, as well as 16-year-old Sian Fuller.

Sardelis, 16, Isla Ward, 17, Taylah Silvestri, 18, Emma Caporaso, 18, Alessia Musolino, 17 and Rylee Vormelker, 17, had the audience on their feet after their showstopping rendition of ‘Bye Bye Bye’ by boyband, NSYNC.

“In Australia, we haven’t had a girl group in such a long time. To come out with girl power is extreme so what a performance, I must say. Well done,” fellow judge, Jessica Mauboy, said after the girl band’s singing.

Rita agreed and sent them straight through to the semi-final instead of making them wait for the other singers on her team to perform before making her final decision.

‘I have so much respect for you’:

Halimah Kyrgios, the sister of tennis sensation Nick Kyrgios, was one of two sent home by Rita despite a powerful rendition of This is Me from The Greatest Showman.

“I have so much respect for you, so much admiration for you in so many different ways,” Rita said after Halimah’s performance.

“Your voice is so strong and so persistent. I’m thinking in my mind, ‘What can I give you, now that you’ve had this amazing moment? How can I coach you to potentially winning this show?’

“Because I know as a musical director watching at home, I will give you a lead role in a heartbeat. But that’s honestly where I see your future and I feel like your career’s just taking off. And with that in mind, I’m going to have to let you go.”

Halimah thanked Rita for her coaching and said she learnt so much from The Voice about who she wanted to be as an artist.

“There’s always the MT [musical theatre] girl, right? But who am I? so that’s something I’m still striving to,” she concluded.