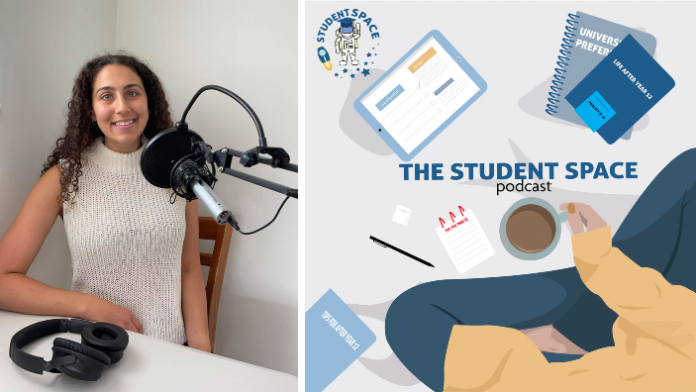 Are you after some hot tips on how to navigate high school, life after school and becoming an adult? Mia Haravitsidis’ new podcast, The Student Space, has all that and more since its launch this year.

The 23-year-old first decided to start the podcast after she graduated from a Bachelor’s degree in Commerce which she wasn’t passionate about and she wanted to stop other students from making the same mistake.

“In high school, I really wanted to be this big CEO, working corporate and I loved the subject Business Management so I thought, ‘I’m going to do commerce at the University of Melbourne’,” Mia tells The Greek Herald.

“At the end of the degree, my two and only friends at university got jobs at big corporate firms and Microsoft and I didn’t get any of those jobs because I didn’t have good enough marks or experience. So I thought, ‘I’m just going to do a gap year’.”

It was on this gap year, as Mia was sipping cocktails on the Greek island of Mykonos with her sister, where the spark for The Student Space podcast was truly ignited.

“I was actually sitting on that beach and I wrote down everything I wished I knew when I was in Year 11 and Year 12. Over the last three years, I’ve learnt that your ATAR doesn’t matter, you don’t have to deal with society pressures and I thought ‘students need to hear this’,” Mia says.

On her return to Australia, Mia studied a Masters of Secondary Teaching at the University of Melbourne to become a fully-fledged educator. She then self-taught herself everything there is to know about podcasting, including crafting episodes, interviewing and editing audio files.

Now, she releases two episodes of The Student Space on Spotify, Apple and Google Podcasts every week and each one is different. She’s interviewed current university students about their university course, people who have taken a non-traditional path from school (such as TAFE or starting their own business), and industry professionals who debunk university terminology, ATARs and everything in between.

“The response has been really great. I’ve been quite blown away by everything,” Mia says.

“I’ve been lucky enough that schools have reached out and I’ve gone to speak at schools just about wellbeing, study, different things like that.

“Actually, while I’ve been talking at schools, a lot of students come up to me at the end and say, ‘can you do an episode on this?’ and I definitely have. The whole aim by the end is that students are like feeding me what they want to hear and then I’ll create the episode for them.”

From there, Mia says, it’s all about focusing on the bigger picture.

“At school, we’re conditioned to follow one certain path. We’re conditioned to go to high school and then go to university and get a really good job. But I think now there’s so much disruption to that, that there’s no norm,” Mia says.

“My whole main message is your life can be whatever you want it to be and you can be so successful no matter what path you take. That’s what I kind of want to remind students. That they really can make the most of anything and they don’t have to do it the traditional way.”