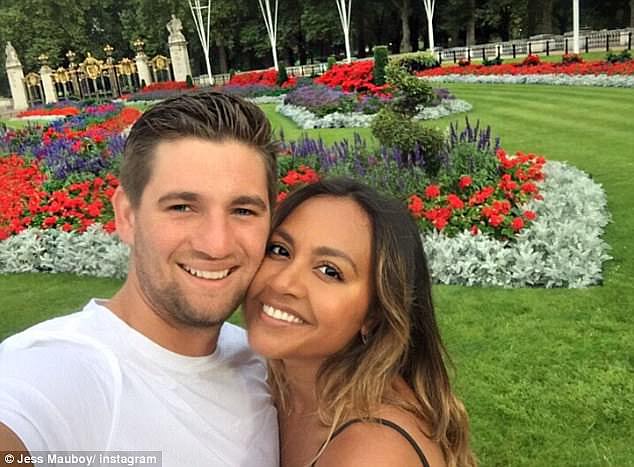 Jessica Mauboy has talked about her upcoming wedding to fiancé Themeli Magripilis.

Speaking to The Daily Telegraph this weekend, the 30-year-old said she spent her Christmas holidays planning her nuptials.

The songstress said she’s asked her four sisters, Sandra, Jenny, Kathy and Sophia to be her bridesmaids.

Jessica explained while she still hadn’t decided on a date, she knew straight away her siblings needed to be in the wedding party.

‘I would love them to be heavily involved in the wedding… They’re all very supportive,’ Jessica said about her siblings.

She added: ‘Hands down my sisters will be my bridesmaids. They will be supporting me as I walk down the aisle.’

It comes after her fiancé Themeli got down on one knee while the loved-up couple were holidaying in Greece in October.

Jessica described the breathtaking moment to The Daily Telegraph at the time.

‘It was that moment of wow, that this was actually happening. I flashed back to all of our time together, he started to go red in the face and welled up in the eyes. That was it, I said yes and I cried,’ she said.

Back in October, she told Nova 100’s Chrissie, Sam & Browny Show that she wanted a ‘traditional wedding’ that brings their two families together.

‘I’d love something really traditional from both sides,’ Jessica told the radio hosts at the time.

‘I think for family too, it’s just him and his sister he hasn’t got a big family, I’d love to do that ceremony for both of our parents,’ the singer said.

Host Jonathan Brown asked how Themeli’s Greek heritage would factor into the wedding and joked about smashing plates, which Jessica said would be ‘really cool’ to do.

‘I’ve been to so many Greek weddings and they are legit smashing everything,’ she joked with the radio stars.

When it came to the music, the singer said she didn’t want anything too formal and didn’t specify who would sing or perform at her wedding.

‘I have really good friends who are [musicians] and it would be really good to have them just get up and do it,’ she said.

When it came to her wedding song, Jessica was a big fan of American artist Luther Vandross behind multiple romantic classics such as Endless Love and Always and Forever.

But the singer wasn’t quite so keen to keep her choices predictable and joked that Luther’s pop duo with Janet Jackson’s The Best Things In Life Are Free was on the table.

Jessica first met her Themeli when she was 18-years-old while out dancing and has said that the construction worker cares little about her celebrity status.