George Houvardas: new role on ABC’s Frayed and why he refuses to play the Greek stereotype 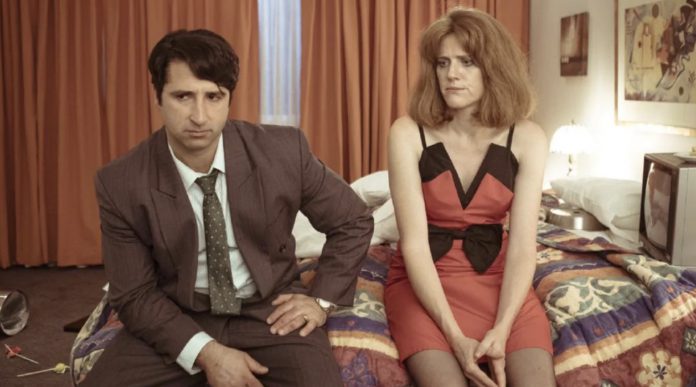 Best known for his role as Carbo on ‘Packed to the Rafters’, George Houvardas has returned to the screen with the ‘Frayed’ series on ABC.

Sarah Kendall’s ‘Frayed’ has been a roaring success in Australia and the UK, with fans already requesting a second season, and the show being nominated for 5 Actor Awards, including Best Comedy.

‘Frayed’ is a dark-comedy is set in 1980s Newcastle, taking on hard-hitting issues like drug addiction and depression.

“In terms of where our world views are now, my character would be considered a chauvinist pig. He’s very insecure and that translates into him being a bit of an a**hole. The kind of guy you want to punch in the face,” explains George of his character in Frayed.

George’s real interest in ‘Frayed’ began when he read the script and resonated with its unconventional methods of racial representation.

“The world has a certain view of Australia, everything’s very clean cut…the beach…everyone’s nice and beautiful…this is very much the opposite in every way,” said George.

George’s character in ‘Frayed’ is of Greek-descent, but because of the “witty writing”, George says the show does not resort to “easy jokes” on ethnicity.

“The only reference in the show to my character’s heritage is one line, responding to why I changed my name to ‘Chris George’, where I say, ‘No one would vote for Chris Georgiadis,’” said George.

“The heritage isn’t what drives the chauvinist pig role, it’s the era…He’s a man of power, and he’s using his position of power to treat everyone like sh*t.”

With his role as Carbo – the ‘Greek-boy-next-door’ – in ‘Packed to the Rafters’, launching his popularity on Australian television, Houvardas made a conscious effort to steer away from roles that cast him as a Greek stereotype.

“After Rafter’s I was offered a lot of stereotypical roles – playing the ‘wog boy’ all the time – and I didn’t really want to go down that path,” said George.

Houvardas praises writer Sarah Kendall, the ABC, Merman, Guesswork and Sky UK for the success of ‘Frayed’, for their support in deterring the show from racially motivated comedy.

“The character wasn’t Greek at all when Sarah Kendall wrote it. She didn’t say, ‘this is a white Australian male’, she just said ‘this is a guy, his name is Chris and these are his attitudes and views on life’,” said George.

George has made a conscious effort to avoid roles that rely heavily on racial stereotyping. He believes that changing ethnic representation in media is up to the individuals involved in the creative process.

“It’s up to the artist to stand up and say, ‘I’m going to make a different choice as an actor or writer’. I think it’s up to the individual to make the change,” he said.

Ultimately, Houvardas believes that the longevity of a show is a testament to great writing. He praises shows like ‘Seinfield’, and ‘The Slap’, and movies like ‘Looking for Alibrandi’ and ‘My Big Fat Greek Wedding’, because the story lines are based on universal concepts.

“I think ‘The Slap’ was a great Australian production, because there was such an open slather of cast members, there was no white-washing,” said George.

“I think the good shows and the well-written shows have longevity, cause they’re connecting to a lot of people, not just the one point of view.”

George is a proud, third-generation Greek-Australian from Lesvos, who continuously works at strengthening his connection to his Greek background.

“You go to Greece and see a country in crisis…but everyone’s out! They might have 10 euro in their pocket to spend, but they’ll go out and stay out for 5 hours and talk and laugh. It’s not about blowing all your cash, it’s about socialising. That doesn’t really translate here…”

George has thought about making his own film about Greeks growing up in Australia, from a more “realistic” perspective.

“I want to portray a more real view rather than the stereotypical gag. In saying that, there’s nothing wrong with it, but I think Australia is quite behind with the portrayal of roles. We do tend to go down that stereotypical role,” he said.

“If you had a guy with Greek heritage, born in Australia, write a script, it would be more accurate than an Anglo-Saxon writing a script and putting a Greek in it. He’s only going to write what he knows. He’ll refer to the ‘hairy’ joke, or the ‘mono-brow’ joke.”

Houvardas is one of many actors around the globe who is standing up to racial stereotyping in media. From a Greek lens, he wants the rich culture of Greek people to be represented accurately – beyond the “food jokes” and the “hairy jokes”.

“Greeks or Italians, they always do get boxed. You’re always going to have the cultural strings,” he said.

“My Anglo-Saxon friends like to make stereotypical food jokes, but then I say – ‘Well doesn’t your mum cook for you? What’s the difference?”

“It’s kind of annoying sometimes, when you see something like that on TV. Like we’re more than that, we’re better than that.”