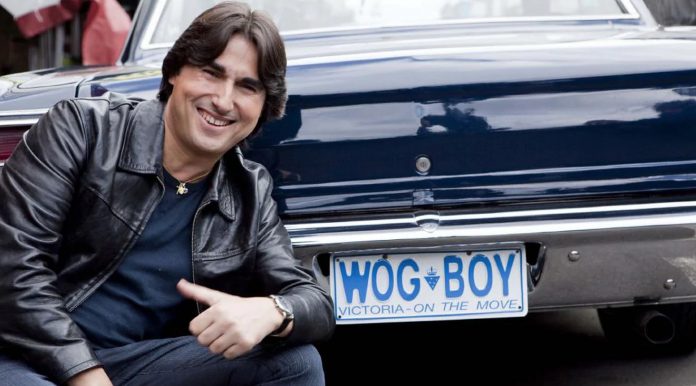 Famed comedian and “wog boy” Nick Giannopoulos has caused quite the stir by warning fellow Greek comedians to stop using the word ‘wog’, or face the threat of legal action.

Giannopoulos trademarked the words “wogs” and “wogboys” in the 90s due to his successful work at the time, including ‘Wogs out of Work’ and ‘The Wog Boy’.

The term ‘wog’ was integrated into Australian culture as a derogatory way to distinguish Mediterranean and European migrants from the ‘White Australia’ culture that had already been established.

In British culture, the term ‘wog’ is considered highly politically incorrect as it seeks its origins from the ‘golliwog’ rag doll – a highly controversial and racist doll from the 1970s.

Then Greek comedians, who had been subject to the racism and discrimination of the word, decided to turn the tables and embrace the positives of ‘wog culture’.

In the context of the 90s, where multiculturalism was still finding its feet, turning the joke on ourselves was seen as an admirable act of rebellion and a progressive response to the discrimination that European migrants had been shamed for. Greek culture was reintroduced and popularised through comedy, which led to many opportunities for Greece and its culture.

All of a sudden, being a ‘wog’ made you part of a stereotype that was normalised by popular humour that everybody found entertaining. Overprotective mothers, over-feeding yiayias, system-cheating businessmen, and ‘compo’ seeking shop-owners became a humorous and stereotypical part of Greek and Mediterranean culture, and even those who initially used ‘wog’ as an insult appreciated the humour.

Though, this is no longer the Australian context we exist in. So why are we still using the word ‘wog’?

Younger Greek-Australians nowadays have no issue putting the Greek flag in their Instagram bio, posting a photo of a lamb on a spit, and using their favourite Greek swear words with their friends, because these were the parts of Greek culture that were popularised to them through comedy, in an Australian context. Unfortunately, the rich history, language and other significant parts of Greek culture have not been as successfully translated into Australia’s Greek culture.

There may have been a place for ‘wog culture’ in comedy 20 years ago due to the rebellious attitude that it stemmed from, but we never stopped to think about the damage it could do to the future of Greece. By popularising ‘wog’ humour, Greek culture has become the world’s favourite joke.

In the current context, Greek-Australian kids and other Mediterranean, or European migrants are still familiar with the word ‘wog’, but it’s almost reverted back to its insulting, discriminatory roots. It’s used as an insult by Greeks to categorise the uneducated, stereotypical, and racist group of Greek’s who we no longer wish to put on a pedestal.

So, really, if Nick Giannopoulos wants to fight for the term ‘wog’, he can. He did reshape the definition of the term, and boldly responded to a context of racism in an innovative way that inspired a generation. Though, this generation are no longer in the limelight, and any form of glorifying racism and segregation no longer has a place in Australian society.

So, whoever his competitors are that wish to keep ‘wog’ humour alive in our current context, should really reassess why they are doing so. These jokes have become cheap, unrelatable and uneducated because we are no longer the source of racism and discrimination. So the longer we attach these stigma’s to our culture, the less the emerging generations will want to associate with being Greek.

The integration of ‘wog culture’ into Australian society was a defence mechanism for the segregation and racism Greeks and Europeans were subjected to in an era where racism was prevalent. Though, in doing this, we also segregated ourselves and put our guards up as a response. And what did this actually achieve?

Are they really OK? Ask them today and every day