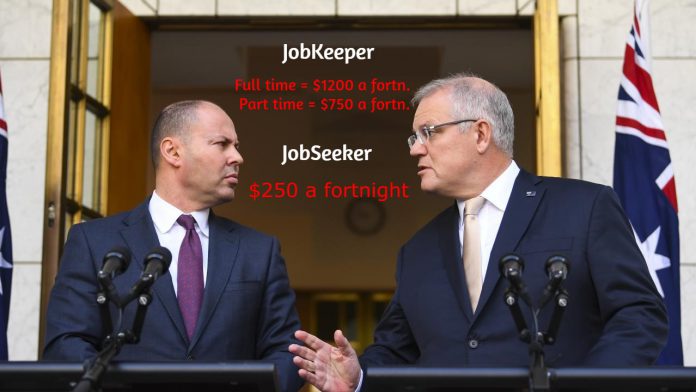 The Morrison government will cut the JobKeeper wage subsidy at the end of September to $1200 a fortnight for full-time workers and to $750 for part-time workers, down from the current single rate of $1500.

The scheme is being extended for six months, until March 28 next year, but will be revised down further at the start of January to $1000 for full-time workers and $650 for part-time employees working 20 hours a week or less.

The JobSeeker coronavirus supplement will also be reduced at the end of September from $550 to $250 a fortnight, meaning those without a job will have their payments cut back to about $800 a fortnight under the unemployment scheme.

The rate of JobSeeker, formerly known as Newstart, was about $560 a fortnight before the pandemic. This was increased to $1100 with the supplement that was due to end in September, alongside the wage subsidy scheme.

The reduced supplement will be added to welfare payments until the end of the year, when the government will reassess the economic situation, but Prime Minister Scott Morrison said the government anticipates it’s likely there “would need to be some continuation of the COVID supplement post-December.”

“We will have Australian’s backs as we face the ongoing impacts of COVID-19,” Mr Morrison added at a press conference this afternoon.

“There is no silver bullet and this is about delivering the support Australians need and the policies our economy requires to reopen, recover and create jobs.”

Treasurer Josh Frydenberg said the extension of support recognised Australia’s economic recovery was still in its early stages and a number of businesses and individuals remained significantly affected by the global COVID-19 pandemic.

“The Government’s focus remains on reopening the economy where it is safe to do so, but the extension of these measures recognises that some parts of the economy will continue to be affected and need continued support,” the Treasurer said.

“Sadly, as a result of this global health pandemic, businesses will close and people will lose their jobs, but that is why we have extended the Coronavirus Supplement and announced a new skills package to help people transition from welfare to work.

“It is also why we are extending the JobKeeper Payment beyond September to help keep businesses in business and Australians in jobs as our economy reopens.”

The JobKeeper wage subsidy is paid to 960,000 employers, who then pass the full payment onto 3.5 million workers.

Businesses will have to prove they’re still in financial distress each quarter, down at least 30 per cent on pre-pandemic levels, to remain eligible for the program after September.