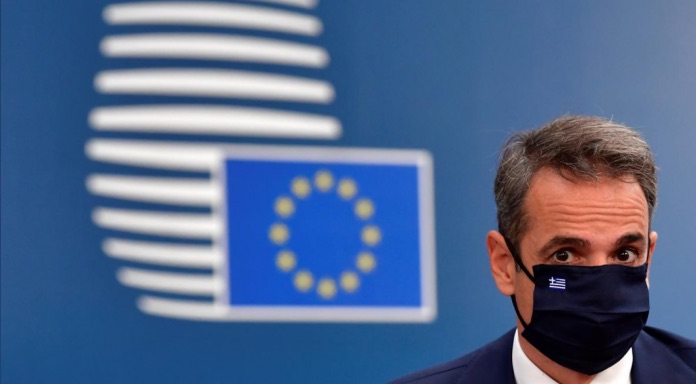 Greek Prime Minister, Kyriakos Mitsotakis, said on Sunday he hoped the third day of the EU leaders’ summit will manage to overcome differences and agree on a mass economic stimulus to kickstart growth in the bloc.

“We have been negotiating for three days and, obviously, there has not been sufficient progress to reach an agreement,” Mitsotakis said at the summit.

“I have noted since the very beginning that we all must compromise, but these compromises can’t be such that they weaken our ambition for a brave European response to the coronavirus crisis and the financial storm it has caused.

“We are facing an unprecedented economic crisis and we don’t have the luxury of appearing divided or weak.”

The in-person conference began on Friday, July 17, in Brussels, marking the first time that EU leaders physically convened since the start of the pandemic five months prior.

The proposed sum causing debate includes the EU’s 2021-2027 budget of more than 1 trillion euros ($1.14 trillion), and a recovery fund worth up to 750 billion euros ($857 billion) that was funneled to Mediterranean coastal countries like Greece that were hit the most by COVID-19.

Greece and various other countries now want the recovery financing to prevent their economies from potentially taking on even greater burdens of dept in the future.

“The big picture is that we are faced with the biggest economic depression since World War II. We need… an ambitious solution because our citizens expect nothing less from us,” Greece’s PM further added regarding the welfare of the country and those impacted.

So far, no progress has been made on the proposal of the President of the European Union Charles Michel. President Michel outlines that a 70-30 distribution of the Recovery and Resilience Facility will be implemented, which is something that Greece is against.