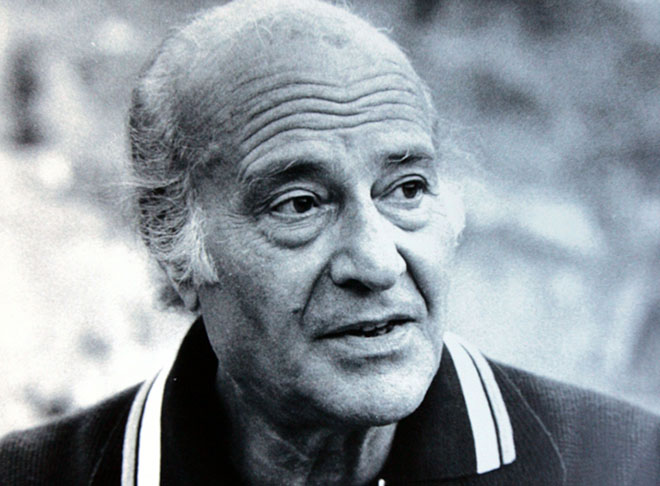 Yesterday marked 24 years since the death of Odysseus Elytis, the “poet of light” who’s words and lyrics made our world look and feel a little more magical. To honour his memory, let’s take a look back at his rich history.

Odysseus Elytis and his childhood:

Born Odysseus Alepoudelis on November 2, 1911, in Heraklion on the island of Crete, he changed his surname to Elytis to avoid any association with his wealthy family of soap manufacturers.

Why ‘Elytis’ you may ask? According to Frank J. Prial of the New York Times, the name was actually “a composite made up of elements of Ellas, the Greek word for Greece; elpida, the word for hope; eleftheria, the word for freedom; and Eleni, the name of a figure from Greek mythology who personifies beauty and sensuality.” Basically reflecting all the things Elytis most treasured (something which will come out later in his poems).

At the age of 3, Elytis and his family relocated to Athens, a move which would see him come into contact with other well-known poets, such as Seferis and Theotakis, in his later years.

Interestingly, while his family pushed him into studying chemistry, in 1930 he decided to enrol in Law School at the University of Athens instead. Something completely unrelated to his work in the arts.

Elytis’ poetry collections include What I Love: Selected Poems of Odysseus Elytis (translated by Olga Broumas in 1978), Maria Nefeli: Skiniko piima (1978, translated as Maria the Cloud: Dramatic Poem, 1981), and To axion esti (1959, translated as Worthy It Is, 1974).

To axion esti  is one of his most well-known poems. It is a poetic cycle of alternating prose and verse patterned after the ancient Byzantine liturgy, and Elytis cleverly depicts the Greek reality through an immensely personal tone.

After the poem’s release, it was described by many as “a kind of spiritual autobiography that attempts to dramatise the national and philosophical extensions of the poet’s personal sensibility.” Elytis, always the humble poet, disagreed with such descriptions of his work saying,

“I have always been preoccupied with finding the analogies between nature and language in the realm of imagination… Everything depends on imagination, that is, on the way a poet sees the same phenomenon as you do, yet differently from you.”

In 1979, Elytis was awarded the Nobel Prize in Literature “for his poetry, which, against the background of Greek tradition, depicts with sensuous strength and intellectual clear-sightedness modern man’s struggle for freedom and creativeness.”

To be recognised for having a part in Greece’s 25-century-old literary tradition was a matter of huge pride to Elytis. His words, upon acceptance of the Nobel Prize, gave evidence of this deep regard for his people and country:

“I would like to believe that with this year’s decision, the Swedish Academy wants to honor in me Greek poetry in its entirety. I would like to think it also wants to draw the attention of the world to a tradition that has gone on since the time of Homer, in the embrace of Western civilization.”

To the present day, he’s the second and last Greek poet honoured with the award.

Elytis had been completing plans to travel overseas when he died of a heart attack in Athens on 18 March 1996, at the age of 84. He was survived by his niece Myrsene and his older brother Evangelos, who received a writ of condolence from the Mayor of Athens on behalf of the nation at the funeral.