‘Once We Were Here’: New multi-generational love story set in Greece during WWII 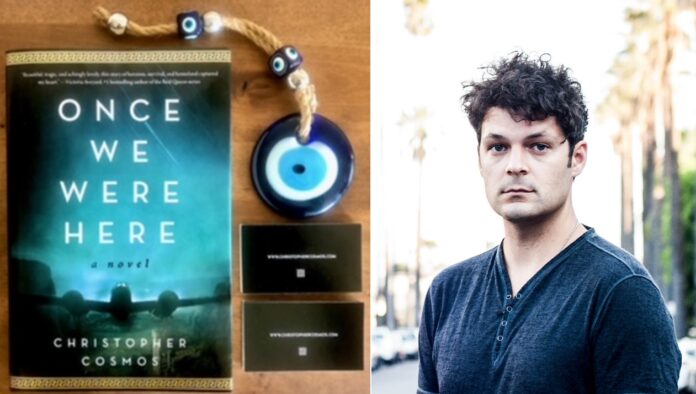 As World War II intrudes upon their home, three young friends risk everything for freedom, love, and a chance at a better life.

This is the premise of a debut book by Greek-American author Christopher Cosmos, titled ‘Once We Were Here’, which is a multi-generational love story set in Greece during WWII.

The book was released in honour of the 80th Anniversary of Oxi Day, and in celebration of the untold story of how Greece helped the Allies to win WWII.

“Growing up, I heard stories of Greece and WWII for as long as I can remember, especially at the Greek Orthodox church that I attended in Michigan, and I wanted to honor those who fought and what they gave,” Cosmos said.

“Those stories that I heard were the inspiration for this novel, which I hope will do just that, and help honour and make the memories of our ancestors, and what they did, eternal, both for us now, and for all generations to come.”

The book was published in the United States by Arcade Publishing on October 20th, 2020, and was published only last week in Australia.

Steven Pressfield (“Gates of Fire”, “The Legend of Bagger Vance”) has called the book “a stunning literary debut about legacy and history, war and peace, fate and destiny, the power of family and stories, and how young love can still shine and endure, even in the face of the greatest evils, and long after we’re gone.”

See below for a small summary of the novel, available to order via links at the authors website:

On October 28th, 1940, Mussolini provided Greek Prime Minister Ioannis Metaxas with an ultimatum: either allow Axis forces to occupy their country, or face war, and Greece’s response was swift. “Oxi!” they said. “No!”

In a small village nestled against the radiant waters of the Aegean Sea, we find Alexei, the son of a local fisherman, and his best friend Costa, who were both born on the same night eighteen years earlier and have been like brothers ever since, though now, like all the other young men in their village and throughout Greece, they will leave their homes to bravely fight for their country.