On This Day: The Exodus of Messolonghi 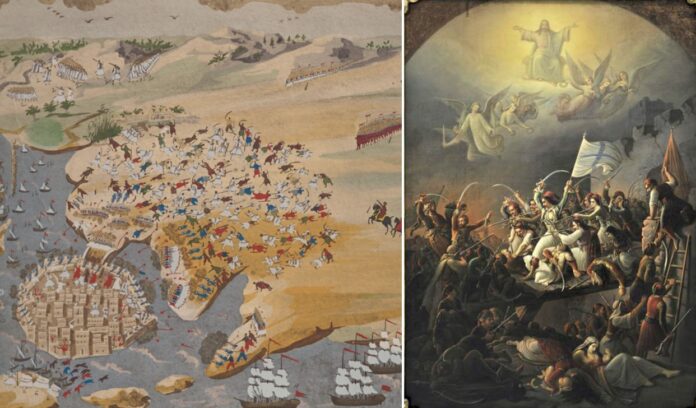 On the night of April 10th, 1826, thousands of inhabitants of Messolonghi, Greece, attempted a mass exodus against Ottoman armies.

Ottoman forces attempted to seize the strategically located port town of Messolonghi not once, twice, but three times. They were successful on the third.

The Greek Herald takes a look back at one of the most tragic and renowned episodes in the Greek struggle for independence.

Messolonghi was the first town in western Greece to join the cause for Greek independence. Messolonghi was a vital bastion in the War for its strategic location.

The first attempt saw Ottoman figures Omer Vrioni, Sultan Resid Mehmed Pasha, and Yusuf Pasha of Patras, lead 11,000 of their force against the town. Negotiations failed, time was stalled by the Greeks, and an unsuccessful assault was launched on the 24th of December 1822. The first attempt lasted from the 25th of October until the Ottomans conceded defeat a week later on the 31st  of December 1822.

The second attempt in 1823, led by Vrioni and Mustafa Pasha Bushatli of Scutari, focused on the town of Anatoliko, Thessaloniki, and famously led to the Battle of Karpenisi.

The third siege and the exodus of Messolonghi

Each attempt brought with it a larger force and greater destruction.

Sultan Reshid Mehmed Pasha led twenty-thousand Ottomans in their third and successful attempt from 15 April 1825 to 10 April 1826. The Sultan assigned trenches to be dug and mounds to be built around the town. In late 1825, Mohammed Ali of Egypt sent a fleet of 135 ships to join Ibrahim Pasha’s force against Greece. The Greek War of Independence was escalating.

Hydra-born Admiral Andreas Miaoulis supplied the townsfolk with food until Ibrahim Pasha cut the town off from its supplies.

The inhabitants became skeletal and health complications arose while, slowly but surely, much of western Greece came under siege.

Fed up, Souliot captains Notis Botsaris and Kitsos Tzavelas, and chieftain Dimitrios Makris, held a meeting in the Saint Spyridon Church to devise a plan to escape on the 10th of April 1826. The three, with the assistance of between three to four thousand men of “military age”, agreed to lead their own group of escapees safely out of the town while the others would attack and divert the Ottoman forces. Now, the Ottomans were onto their scent and began their tirade against the Greeks. “The town was like a roaring furnace,” Nikolaos Kasomoulis, a captain secretary, once recalled. Thousands died. Many others surrendered or committed suicide. Many of the escapees were sold into slavery. Only 1,000 of the 7,000 involved in the exodus that night survived.

The tragedy caught the attention and prompted ‘Great Power’ intervention from Great Britain, France, and Russia to ally with the Greeks in the Battle of Navarino and help secure Greece’s independence.

Messolonghi was handed back to the Greeks four years after the massacre.

Messolonghi is recognised as the “Holy City of Greece.” 500 metres of Missolonghi’s fortifications has endured the test of time and can be seen today.

Theodoros Vryzakis’ oil painting The Exodus of Messolonghi (1814, or 1819-1879) famously captures the uproar, tension, and drama of the night in academic and calligraphic detail. French painter Eugène Delacroix’s Greece on the Ruins of Messolonghi (1826) sits in the Musée des Beaux-Arts de Bordeaux in Bordeaux, France.