On this day in 1896: The Charioteer of Delphi was found 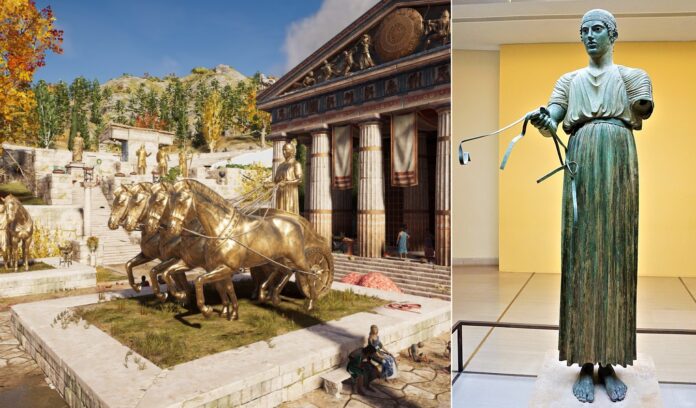 The Charioteer of Delphi, also known as Iniohos (in Greek meaning the rein-holder), is one of the most known remaining sculptures from Ancient Greece and is recognized as one of the best examples of an ancient bronze sculpture. The chariot driver’s statue was discovered in 1896 at the Delphis sanctuary of Apollo and it was found by French archeologists. The statue is now displayed at the Delphi Archeological Museum.

Delphi’s charioteer is one of ancient Greece’s most important sculptures, mainly because it beautifully demonstrates the transition from Archaic to Classical standards; a combination of the rigid, almost tight postures of Archaic sculptures but with the action of classical. It perfectly illustrates the balance between stylized geometric representation and idealized realism.

The Greek name of the statue is Iniohos (he who holds the reins), was part of a complex of statues that included his four horses, the chariot on which he rode and two stable boys. The sculpture dates back between 478-474 B.C, and Apart from missing his left arm, the bronze statue is in outstanding condition. Inhiohos is an impressively to scale model, with a height of 1.8m.The scale is possibly chosen to specifically highlight the importance of the drivers physique, because just like in modern equestrian sports, athletes of chariot racing were chosen for their high height and light weight.

What makes the statue unique for its time period is that it was created with bronze, a material that was expensive at that time, and only the elite could afford it. Most known wealthy Greek families were from Sicily, a settlement of the Greek cities that was significantly wealthier than most of mainland Greece, hence why bronze the statue was in Sicily. However, it is unlikely the statue was actually created in Sicily because the statue’s style has more Athenian similarities. The driver of the Chariot is believed to be Polyzalos of Gela, a Sicilian Tyrant who also paid for this sculpture to be built and offered as a devotion to Apollo. The statue commemorates Gelas own victory at a Pythian Game chariot race. The Pythian games were taking place every four years to honour Pythian Apollo. As well as being made from bronze the statues details also make it unique. The inlaid eyes are one of the most intriguing features, which are created from glass. Another important detail of the statue is the drivers bare feet, which are so intricately designed that they even show his veins. Possibly the most interesting and unanswered question the statue raises is who was the sculptor? There are many speculations for who could create that art piece, but no definite answer. The most known sculptors that historians suggest is Pythagoras from Samos or Calamis, but there are also many similarities with the Pireus Apollo, ánother famous statues that was sculpted in Athens.

The Chariot of Delphi is an impressive and rare sculpture that encapsulates Greek culture,  depicts its vast history and showcases Greek ingenuity, this is why Inhiohos is one of the most known and important statues of Greece.