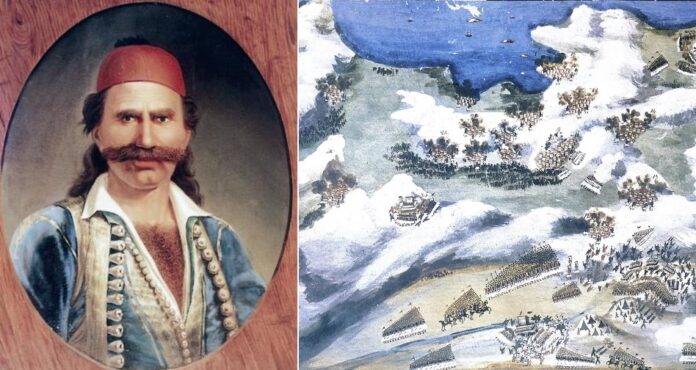 The Battle of Gravia Inn was fought between Greek revolutionary fighters and the Ottoman Empire on May 8, 1821. The fight was led by Odysseas Androutsos, with a group of 120 men against an 8,000 men Ottoman army.

After the victory in the Battle of Alamana, Turkish commander Omer Vrioni looked to attack the Peloponnese. This was until he was met by Androutsos and his men inside an old inn. Dimitrios Panaourgias and Duovounitis also had a group of men who took post at a higher position. The two captains thought the inn would be blown up and the battle would end in disaster, hence why the higher position allowed them to flee.

The Ottomans surrounded the inn; however, they were taken back by a number of heavy losses. The Ottomans paused their attack at night, which proved to be a huge devastation for them. While they were taking cannons to the inn, the Greeks had fled into the mountains quietly while the Turkish allies, the Albanians, were fast asleep.

The Albanians who charged into the building were met by heavy gunfire, and suffered many casualties. Androutsos ordered his men to fire together at once, while the others would fill their guns to take their place. This was the best method to counter any massive attack. The Ottomans were also met with gunfire and were forced to leave.

Vrioni suffered huge casualties, with 300 soldiers dead and 600 wounded within the first couple of hours of fighting. This was a shear contrast to Androutsos, who only lost 6 countrymen.

The battle resulted in Vrioni retreating back to Evia and allowed for the Greeks to regain control of the Peloponnese and regather the capital of Tripoli.