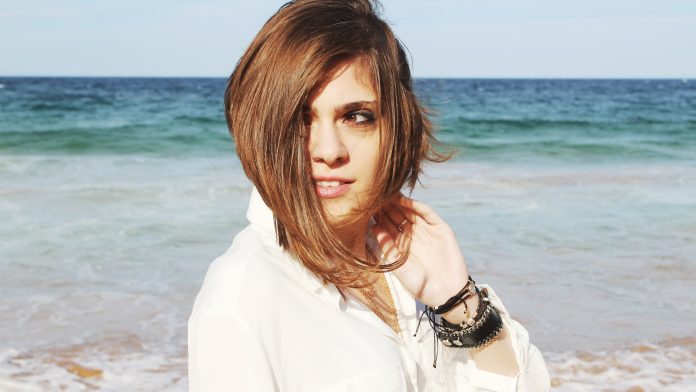 “Life’s a ride, yeah it gets tough; the bitterness of it keeps me strong,” upcoming Greek Australian artist GIA sings on her 2018 track ‘Life’s A Ride’.

GIA knows this ride better than most and she’s only 23-years-old.

Yianna Nicholas, better known by her stage name ‘GIA’, grew up “just at the foot of the mountains” in Saint Marys in Sydney’s outer west.

Her grandparents emigrated from Tegea, Tripoli, to the Penrith area.

She says musicality courses through her veins.

“My dad is a guitarist,” she tells the Greek Herald.

“[He] threw the guitar into my hands at the age of four and I haven’t put it down since.”

She found her greatest inspiration in the Greek music that her parents would play while she was growing up.

“[Greeks] have a way with words. They’re very deep, they’re very good at communicating how they’re feeling in that moment.”

“Their writing is full of depth and I love that.”

‘Eclectic’ is the word Gia uses to define her musical style, but if “you’ve got to throw it into a box and confine it, ‘pop rock’ would be it”.

She started performing at 12-13 years old in the Fitzroy Hotel in Windsor and the Heritage Hotel in Wilberforce.

“The best place to learn how to handle a crowd,” she says.

She made her way out of “your common beer-swinging and chicken schnitzel lunch” kind of pubs and into Jimmy Barnes’ home studio.

She recorded part of her self-entitled thirteen-track record ‘Gia’ in this studio and released it during her brief stint with record label Zeus Entertainment in the late 2010’s.

She says she prefers the “creative freedom” and uncontrolled nature of releasing her own music.

“I was sort of controlled in a way with what I could write, again, how I was dressing, how I should pose,” she says.

“Don’t get me wrong, it taught me a lot because now I have the equipment and the knowledge to do it on my own.”

“For me, I love music way too much and I’m stubborn in that I do like to be in control of what I’m doing.”

“Which is why I have the hopes one day to start my own record label that works for the artist.”

Sydney’s current lockdown has been more creative for Gia than its last.

“The last lockdown that we had last year was very difficult. I wasn’t being creative at all. I was too busy trying to find a job and try to get some form of income because that was literally my only form of income.”

“I had a show lined up last year at the Factory Theatre in Marrickville and it got cancelled literally a week out because of the COVID-19 lockdown. That was a great loss.”

“In terms of shows, I can’t do anything right now unfortunately as much as I’d love to, and I am missing the stage a lot.”

On the flip-side, the current lockdown is working Gia wonders.

“I don’t know what’s happened, I’ve shifted and I’m actually being really creative working from home I guess that help,” she says.

Gia says she’s currently working with established producer Paula Jones to “bring out some new singles, new footage,” and “just anything and everything to try to ease the heaviness of this lockdown”, with plans to hit the road once lockdown is over.