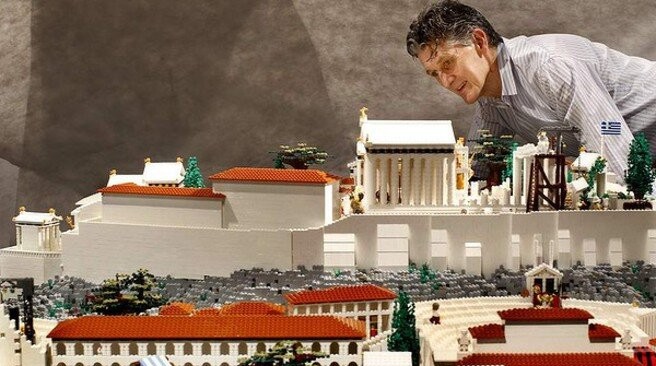 The LEGO Acropolis is currently on display at the Acropolis Museum in Athens. Speaking to Margaret Throsby on ABC Radio, head curator Michael Turner said the LEGO Acropolis gained great publicity after being displayed for a few months in the Nicholson Museum.

Turner says he got a phone call late one evening by someone enquiring to borrow the Acropolis model.

“I said well ‘who are you?’ And he said oh I’m so sorry I’m ringing from the directors office of the Acropolis Museum in Athens,” Turner said.

Rather than allow the Acropolis Museum to borrow the model, Turner donated the LEGO creation to the Museum for them to keep.

“I was speaking to the Director of the Acropolis Museum and I went down onto the floor and the LEGO Acropolis is surrounded by people,” Turner added.

The model holds more than 120,000 “Lego bricks” and took about 300 hours to build. It is as accurate as possible with the Parthenon, the Temple of Athena Nike, the smallest temple of the Erechtheion and the Propylaeum.

The structure also contains hilarious modern and ancient snapshots made with Lego. In the small conservatory, for example, Theseus walks through a labyrinth to face the Minotaur. In the Odeon of Herodes Atticus Elton John gives a concert for modern tourists.