Imia Crisis: A battle between flags 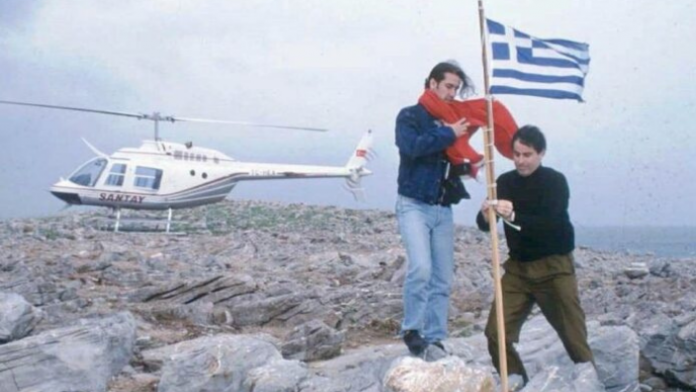 The small Greek island of Imia was almost the catalyst of war between Greece and Turkey in 1996, and remains a sensitive topic for leaders of both nations.

An issue first arose on Christmas Day in 1995, when a Turkish cargo ship “Figen Akat” hit shallow waters near Eastern Imia and emitted a distress signal. The Greek Coast Guard came to the ship only to be turned away by the captain, who claimed he was in a Turkish area.

The two Foreign Affairs Ministries communicated and worked together to rescue the ship. Thought to have ended there, only three days later a Turkish fighter plane crashed in Greek territorial waters, in the area of ​​Lesvos, after engaging with Greek fighters. With Greek help, the Turkish pilot was rescued.

One week later, Greece sends out vigilance measures in the area of ​​Imia to protect the isles.

On January 26, 1996, the mayor of Kalymnos, Dimitris Diakomichalis, raised the Greek flag on one of the two islands. Yet, it only took one day for two ‘Hurriyet’ journalists to fly to Megali Imia by helicopter. They raised their own Turkish flag, broadcasted live by the Hurriyet TV channel.

Another day passes, another flag raised. This time, a patrol boat of the Navy “Antonios” lowers the Turkish flag and raises the Greek one.

Greece’s new Prime Minister Costas Simitis later sends a message to Turkey that Greece will respond immediately and vigorously to any challenge. Turkish Prime Minister Tansu Ciller, meanwhile, called for negotiations on the status of the Aegean islets. This was done, however, while Turkish warships enter Greek territorial waters and approach Imia.

On January 30, US President Bill Clinton weighed in on the conflict, shocked at the escalation.

“I thought my aides were joking when they said Turkey and Greece would engage in war over rocks on which none but sheep live. I held phone calls with the leaders of both countries, and convinced them to not go to war over the rocks that inhabited mostly 20 sheep,” Bill Clinton said about the crisis.

The Greek government said they are ready to withdraw the procession, but not the Greek flag. The Turkish Foreign Minister responded saying there are other Aegean islands with unclear legal status and does not accept the Greek proposal (departure of the procession, not the flag).

On January 31, Greek forces feared the worst as information arrived claiming Turkish commandos are landing in Imia. Helicopter of the Greek Navy confirmed a few hours later that around 10 Turkish commandos stood on the island with their flag. That same helicopter later took damage and disappeared, killing three Greek crew members.

The US Government soon intervened, arguing for a diplomatic solution. By noon on 31 January, 1996, the ships, soldiers and flags had been withdrawn from Imia.

The crisis had no effect on the status of the islands, yet it’s sovereignty is still in dispute by both nations. Currently, the islands are regarded as indisputably Greek by Greece but as grey zones of undetermined sovereignty by Turkey.