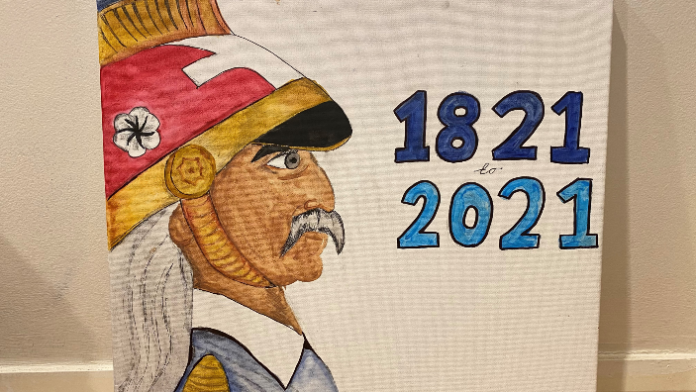 The competition titled, Ambassadors 200, that took place in Victoria this year has been successfully completed and the winners have been announced.

The competition was organised by the Organisational Committee for Greek National Day under the auspices of the Greek Orthodox Archdiocese of Australia and in conjunction with the General Secretariat for Greeks Abroad. It was launched in February, at the commencement of the 2021 School Year and ended in June.

The aim of this competition was for students from Primary, Secondary and Tertiary Levels who were studying the Greek language, as well as young people of Greek descent between the ages of 18 to 21 years old from all over Victoria, to have the opportunity to actively participate in the celebration of the 200th anniversary of the beginning of the Greek Revolution.

Participants were asked to explain what 1821 meant to them. Each participant had the opportunity to present their views through an essay, a poem, a drawing, a power point presentation, a poster, an interview, a song, a painting or an object.

More than 650 young people participated in the competition, mainly Primary and Secondary students, from twenty-eight different schools. The entries were judged according to the age of the participants by a special committee of seven members. All entries were amazing and the participants showed the special knowledge they had for the Commemoration of the 25th of March.

The Organisational Committee for Greek National Day had scheduled a special event for Monday 27th of September as part of the Victorian Bicentenary Program 2021.

Unfortunately, due to the COVID-19 restrictions, the event has been cancelled and the Chairman of the Victorian 2021 Bicentenary Committee, Mr Antonis Tsourdalakis, together with the Coordinator of the competition, Mrs Natasha Spanos, will visit all the schools during Term 4 to present the awards in person and to congratulate all the participants.

All participants will receive a Certificate of Participation from the Organisational Committee for Greek National Day.

The best 200 entries will officially be named as Ambassadors of Victoria for 2021 and they will be awarded with two special certificates, one from the Greek Orthodox Archdiocese of Australia and one from the General Secretariat for Greeks Abroad.

They will also receive the official commemorative medal of the 200th Anniversary produced and sponsored by the National Bank of Greece and the National Lapel Pin compliments of the National Bicentenary Committee.

The Organisational Committee for Greek National Day would like to thank all the participants, the teachers and the schools that took part in the competition and actively celebrated the 200th anniversary of the Greek Independence Day.

The full list of winners can be found here.