The Battle of Dervenakia: Greeks claim victory over the Ottomans 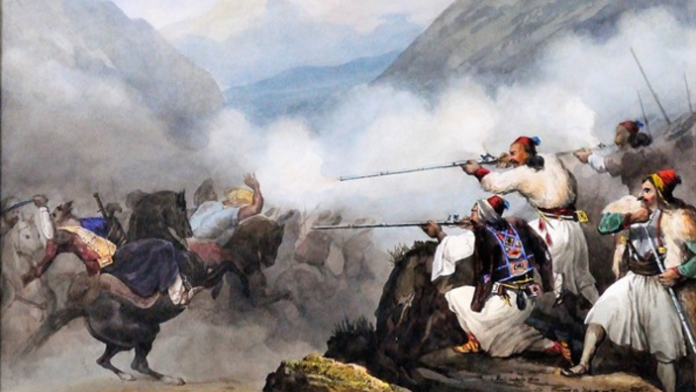 On July 26, 1822, one of the most important battles of the struggle for Greek Independence was fought – that is, the Battle of Dervenakia. It was during this battle that the strategic genius of Theodoros Kolokotronis became apparent.

At the beginning of July 1822, a new danger appeared for the Greek Revolution with the arrival of a strong Turkish force under Mahmut Pasha to the Peloponnese. He is better known as Dramalis.

Without encountering the slightest resistance in Eastern or Central Greece, Dramalis advanced with 25,000 men and on July 6 encamped in Corinth. His main goal was to recapture Tripolitsa and the suppression of the Revolution in Moria with the help of the Turkish fleet, which would sail to the Argolic Gulf.

Obedient to the local Turkish leaders, who advised him to make Corinth his base and having great confidence in his forces, Dramalis ordered his army to advance towards Nafplio to end his siege.

After capturing Acrocorinth, he arrived in Argos undisturbed and encamped outside the city on July 12. The rebels were caught asleep and could not defend the straits between Corinth and Argos, through which the Turkish army passed.

As soon as they learned that Dramalis and his army were approaching Argos, there was great confusion among the Greeks.

At this difficult moment, Theodoros Kolokotronis stood up. Within a short time, he declared a pan-army and managed to limit the army of Dramalis in Argolida and to stop his march to Tripolitsa.

Kolokotronis’ measures focused on occupying strategic positions in Argolida (most important of all was Larissa, the ancient Acropolis of Argos) and the “scorched earth” tactics he applied, creating an acute food problem for the invaders.

Realising the difficult situation, Dramalis decided to return to Corinth, hoping for help from Khurshid Pasha of Larissa, Yusuf Pasha of Patras or the fleet.

Dramalis’ plan of retreat was realised by Kolokotronis and despite the disagreements of the elites, he hurried to occupy the narrow passages leading from Argos to Corinth, with 2,500 men. He would not leave the alleys unguarded for the second time, as had been done during the advance of Dramalis.

In addition to Kolokotronis, Dimitrios Ypsilantis, Papaflessas and especially Nikitas Stamatelopoulos, better known as Nikitaras, who received the nickname Turkofagos Dramalis, and his remaining men tried to escape the next day. However, Nikitaras, Ypsilantis and Papaflessas were also there to inflict new heavy losses on Dramalis on July 28th.

With the remnants of his army, Dramalis arrived in Corinth, where at the end of October he died.

The triumphant Kolokotronis was proclaimed General of the Peloponnese by the Government, at the request of the chiefs. The Revolution had not only been saved, but had acquired a strong foundation.

READ MORE: On This Day: The Expedition of Dramali comes to an end.