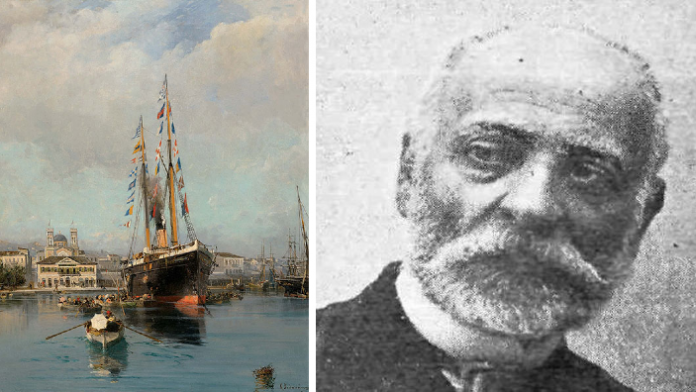 Konstantinos Volanakis was a Greek painter who became known as the “father of Greek seascape painting.” On this day in 1837, Volanakis was born in Crete.

To mark the day, we share our four top facts about the painter.

Konstantinos Volanakis was born at Heraklion on Crete, to parents who came from a small village near Rethymno. Later, they moved again for business reasons, and he completed his basic education on Syros in 1856.

Afterward, urged on by his brothers, he went to Trieste and became a book-keeping clerk for a family of Greek merchants who were related to his family by marriage. While there, he made sketches of ships and harbours in his account books.

Rather than dismiss him, the family recognised his artistic talent and made arrangements for him to study at the Academy of Fine Arts, Munich, under Karl von Piloty.

Among Volanakis’ most outstanding pieces is the “Naval Battle of Salamis” which depicts the famous ancient naval battle between an alliance of Greek city states and the Persian Empire. It belongs to the Hellenic Navy and traditionally hangs in the office of the prime minister (Volanakis first presented the work at the Royal Palace in 1883).

Volanakis never engaged in portraiture or depicting other aspects of life in the nascent Greek state, dedicating himself entirely to maritime painting. His love for the sea and ships led him to depict all facets of maritime life: from tranquil seas and idyllic harbors and beaches, to intense naval battles and raging tempests.

4. An imposing and tragic figure:

As an individual, Volanakis was himself both an imposing and tragic figure. His decision to return to Greece in 1883, despite his close friend Nikolaos Gyzis’ advice against doing so, ultimately had a negative impact on his quality of life, and often his painting. His wife’s health problems, his financial woes, and his limited social life ultimately led him to attempt to take his own life.