Seven facts you should know about women in Sparta 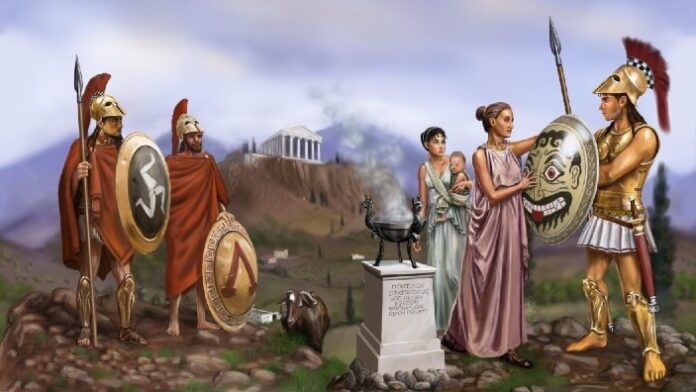 Spartans were famous for producing strong and powerful soldiers. But what do we actually know about the women of ancient Sparta? Without a doubt, Spartan women were the most educated, athletic and outspoken progressive individuals of the Ancient Greek world.

Providing education for women was not important for most Ancient Greek cities. Primarily, a woman’s role for example, in Democratic Athens, was to take care of children and the housework. In Sparta, girls were started their education around the same age as boys (between 6-7 years of age). The education system was concentrated on military preparation and girls had a similar education. They also received physical education, which combined wrestling, gymnastics and combat skills. A healthy physical appearance was important because Spartans believed that only a healthy woman could produce  healthy babies. This goes back in Greek history when a Spartan Queen named Gorgo, wife of the famous King Leonidas was asked by Athenian woman, “why do only Spartan women rule their men?” . Her answer to that question was, “because we are the only women who give birth to real men!”

Women in Sparta, contrary to those from Athens, could own property in their own names. Even according to famous Greek Philosopher Aristotle, two-fifths of the land in Sparta was owned by women. It’s unbelievable to think that they were so free and independent, where in most Greek cities, women were the property of their husbands. But how could they own a property? Spartan women did this through inheritance or from their dowries. Typically, the land was left to the owner’s children after his death, with daughters inheriting half of what sons got. Of course, the law on selling land extended to both men and women. But also Because of the Spartan culture’s structure, Spartan women were the household rulers. Men spent the majority of their lives in the agoge, barracks, and eventually at war. They’d return to their house, which was run by their wife or surviving children if they were lucky enough to live long enough to retire at the age of 40.

3. They could dress boldly:

Sparta was the only city-state that allowed women to exercise and train. And because of that, the clothes were more daring than from other cities. The dresses were shorter than normal ones, showing more flesh. This was accepted by society since women and men were expected to be fit and healthy-looking.

4. The greatest honour was to die during childbirth:

5. They were married at an older age than Athenians:

Girls in Sparta did not have to marry until they were eighteen years old. Men usually married in thier mid-twenties or thirties. The age difference between husbands and wives was smaller compared to Athenians and girls in Sparta married significatly later than their sisters in Athens.

This was very important for Ancient Greek society, as women were not allowed to step  foot into the sacred place where the Olympic Games occured. Women would even face a death penalt if they were seen as spectators inside the stadiums. Despite this, the first ever female Olympian winner was Spartan! Her name was Kyniska or Cyniska, she was the daughter of King Archidamus II. She was only allowed to step into the sacred Olympic grounds as a horse trainer. There was a large property where she bred, kept, and trained horses, and in 396 BCE, when she was approximately between 40 and 50 years old, she became the first woman to compete in the Olympic Games. Her triumph had a major influence on ancient Greek culture. Following Cynsica’s achievement, other female athletes wanted to get in on the Olympic action. This included fellow Spartan Euryleonis, who won the two-horse chariot race in 368 BC.

At the age of 7, Spartan boys were taken from their parents’ house to start their military education “agoge”. As Spartan community was design to shape professional soldiers, the education needed to start at a young age. For a Spartan mother was the biggest pride was to raise a strong and brave soldier. According to Plutarch, one woman gave her son a shield and told him to come home “either with it or on it” before a battle.

The world knows Sparta for its men and soldiers, but without the women, Sparta would not have existed.