On This Day in 1974: The first Turkish invasion of Cyprus was launched 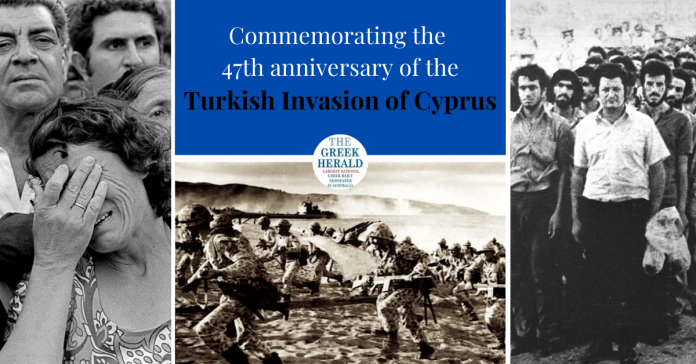 The Turkish invasion of Cyprus, codenamed ‘Attila’, began at dawn on July 20, 1974. A day that changed Cyprus forever and will be ingrained in the brain of every Cypriot for hundreds of years.

Approximately 4,000 people were killed during the invasion and 1,619 were reported missing. As many as 200,000 Cypriots were forcefully driven away from their homes and became refugees in their own homeland.

A total of about 40,000 men took part under the command of Lieutenant General Nurettin Ersin. With the Greek side caught asleep, their reaction was delayed, resulting in what Turkey labelled as a “peaceful intervention,” aimed at restoring constitutional order in Cyprus.

The battle last for two days. On the dawn of July 20, Turkish landing craft reached the Pente Mili area, followed by swarms of attacks by Turkish planes. With Greek forces left outnumbered and unprepared, Cypriot inhabitants were at the mercy of the invaders. Unarmed civilians were killed, women were raped and captured soldiers were executed.

The units of the National Guard and the ELDYK, when mobilised, began to fight with heroic self-sacrifice. They utilised around 12,000 men (Greek Cypriots and Greeks), under the command of Brigadier General Michael Georgitsis, who was the general in command in the coup against Makarios.

Late at night on July 20, the UN Security Council issued Resolution 353, calling for a ceasefire and the withdrawal of ‘foreign troops’ from Cyprus. Despite its unanimous approval, it was completely ignored by Turkey. The next day, July 21, the fighting in Cyprus continued with great intensity.

On the same day, Cisco planned to arrange a ceasefire between the two countries. Upon entering Athens, he was unable to find anyone in Athens to negotiate with, as all those in charge had disappeared. The commander of the Navy, Admiral Petros Arapakis, finally took responsibility, who in a telephone communication with Kissinger agrees that the armistice will take effect from 4 pm on July 22.

At 4 o’clock in the afternoon the next day, July 22, a truce was agreed, yet it will be violated several times by the invaders. After the first invasion, Turkey controlled 3% of Cypriot territory, and would soon go on to capture approximately 37% of the island during the second invasion in August 1974.

Today, more than 43,000 armed soldiers from Turkey remain in the occupied areas of the island. More than 800 persons, civilians and soldiers, are still missing, while the Turkish side refuses to cooperate fully in ascertaining their fate.

About 400 Greek Cypriots and Maronites, out of 20,000 at the end of August 1974, remain enclaved in their still-occupied villages, living under conditions of oppression and deprivation.

A series of UN General Assembly and Security Council resolutions, as well as resolutions adopted by numerous other international organisations, reflect the universal condemnation of Turkey’s invasion and all subsequent acts of aggression against the Republic of Cyprus. The resolutions demand, inter alia, the withdrawal of foreign troops, the return of refugees to their homes in safety and the ascertainment of the fate of missing persons. Moreover, they call for the respect of the human rights of all Cypriots as well as for respect to the independence, sovereignty and territorial integrity of Cyprus.

In its Judgment on the 4th Interstate Application of Cyprus v. Turkey on May 10th, 2001, the European Court of Human Rights found Turkey guilty of continuous violations of human rights in Cyprus.

A new round of negotiations, aiming at a comprehensive settlement of the Cyprus problem, was initiated in September 2013. As all previous ones, it had been conducted under the auspices of the UN Secretary-General’s Good Offices Mission. On 11 February 2014, the leaders of the two communities adopted a joint declaration which, inter alia, reaffirmed the basis of a settlement, namely a bi-communal, bi-zonal federation with political equality, as set out in the relevant Security Council Resolutions and the High Level Agreements. It also reaffirmed that any settlement should ensure the common future of all Cypriots within the EU.

From May 2015 to June 2017, negotiations proceeded intensively and significant progress was reached on an important number of issues. Regrettably, the International Conference on Cyprus, which was mainly focused on security and guarantees post-settlement, at Crans Montana, Switzerland (28 June – 07 July 2017), concluded without result, due to Turkey’s insistence on maintaining the right to unilaterally intervene in Cyprus, retaining an anachronistic system of guarantees and permanently maintaining troops on Cyprus after the settlement.

Τhe recent Informal Geneva Conference, which convened on 27-29 April 2021, aimed at exploring the possibility of finding common ground for the resumption of substantive talks with a view to finding a solution within the framework of the UN Security Council resolutions, the High Level agreements and occasional convergences between the two sides.

However, Turkey and the Turkish Cypriot leadership, in defiance of the UN Charter and UN resolutions, demanded that any negotiation should focus on the recognition of sovereign rights for the Turkish Cypriot community and reaching a solution based on the recognition of two states. A claim that is not only against international law and the terms of the Secretary General’s mandate, but also clearly contrary to the will of the Cypriot people.