On This Day in 1974: PASOK was established 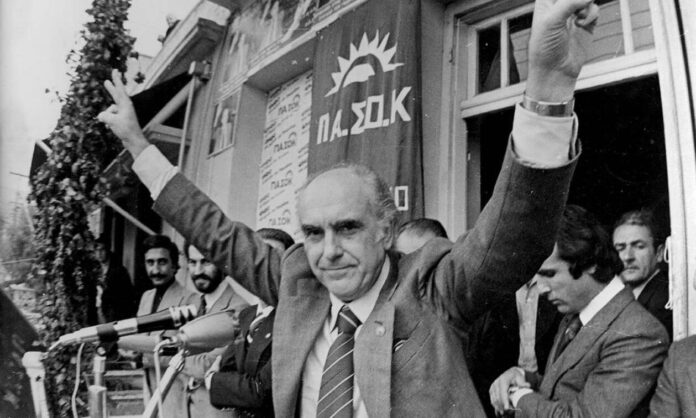 On September 3, 1974, Andreas Papandreou announced the establishment of the Panhellenic Socialist Movement (PASOK), a political faction that would dominate post-colonial Greece politically.

We take a look at how the historic occasion played out.

The fall of the junta in Greece on July 24, 1974, found Andreas Papandreou in exile in Canada.

During this time, he had founded the resistance organisation known as the Panhellenic Liberation Movement (PAK). On August 6, PAK held a conference in Winterthur, Switzerland, where it was decided that the party would be dissolved and turned into a socialist party.

A committee was tasked with drafting a “declaration of principles” for the new political formation.

On August 16, Papandreou returned to Greece and was warmly welcomed by his political friends and thousands of people at the Hellinikon airport.

One of the first problems he faced with the establishment of this new party was its name. Papandreou proposed the ‘Panhellenic Socialist Movement for the Renaissance of Greece,’ but the term “Renaissance” was considered obsolete by most of his interlocutors, while others said it looked like a junta slogan.

The official presentation of the new party took place on September 3, 1974 at the King Palace Hotel in Athens, in the presence of 150 people, who formed its founding core.

Papandreou appeared late in the event hall. He read the entire ‘Declaration of Principles’ and then distributed it to the journalists present, printed on a small green booklet.

The four defining the principles of PASOK were: national independence, people’s rule, social liberation and democracy.

PASOK won the elections in 1981 based on a socialist agenda that was anti-European Union and anti-NATO. Papandreou never fulfilled his promises to pull Greece out of the EU or NATO.

Ironically, the man who put Greece in the European common currency bloc in 2001 was PASOK Prime Minister Simitis.

It was equally ironic that George Papandreou, Andreas’ son, led Greece to the austerity bailout deal in 2010 during his brief stint as prime minister from the end of 2009 until 2011.

The once mighty party is now a political entity that in 2018 merged into a new political alliance of centre-left parties called the Movement for Change, becoming the third largest party in the Hellenic Parliament in the 2019 election.