On This Day in 480BC: Greeks defeat the Persians at the Battle of Salamis 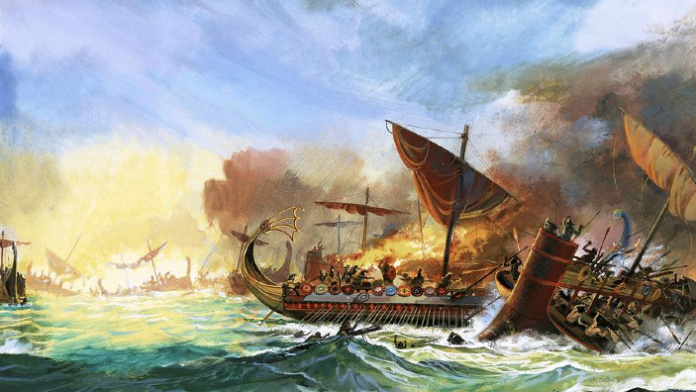 On this day in 480BC, the Battle of Salamis, which is one of the most famous naval battles of antiquity, took place. During the battle in the straits of Salamis, the Greeks, under the leadership of Themistocles, defeated the mighty Persian fleet.

After the fall of Thermopylae, the Persians of King Xerxes advanced on Athens and easily occupied the city because the Athenians had abandoned it.

The Athenians had heard from the Oracle of Delphi that only “wooden walls” would save them and they considered their ships as such, to which they resorted for battle.

Only a few elders who did not believe the “wooden walls” were the ships, stayed in Athens, locked themselves in the Acropolis and built real wooden walls around them. When the Persians arrived, they killed them and burned Athens.

Meanwhile, the Persian fleet was anchored in the bay of Faliro, having sailed to Evia and Sounio.

The Athenians, after transporting their women and children to Aegina for more safety, boarded their ships and prepared for confrontation with the Persians.

The war council of the Greeks, which took place at Salamis, was stormy. The Spartan, Eurybiades, suggested the naval battle be fought in the Isthmus of Corinth, with the main argument that in case of failure they could take refuge inside the Peloponnese and continue the fight from there. The Corinthians supported him.

The Athenian, Themistocles, insisted that the naval battle be fought in Salamis and the Megarians and the Aeginians joined him. He believed that if the small Greek forces fought on the high seas with the huge Persian fleet they had no hope of victory. On the contrary, it was an ideal place for naval battle in the Strait of Salamis, where the numerous Persian ships could not grow in number.

The Battle of Salamis:

Eurybiades may have been formally the leader of the Greek forces, but Themistocles was the mastermind of the operation.

In order to speed up the naval battle, he used the following trick: He secretly sent Sikinos’ teacher to the Persians to tell them that the Greeks were supposedly preparing to leave Salamis and if they wanted to defeat them, they would need to rush to catch them.

Xerxes fell into the trap and ordered the Greek fleet to be surrounded and to block its retreat to the Isthmus of Corinth.

The Persians lined up around 1,200 warships, although newer sources estimate them at 600 to 800, while the Greeks had about 371 triremes, according to Herodotus.

At the dawn of September 28 or 29, 480 BC the two fleets found each other facing each other, ready for naval battle. Xerxes, confident of his victory, sat on a golden throne on Mount Egaleo to enjoy the spectacle of war.

The Greeks were the first to rush. Their war songs, the trumpets, the war cries, the fires aimed at the Persian ships, the smoke, but above all the bravery of the Greeks, saw victory begin to lean towards them.

The battle continued all day, until at night the sea was full of wood and Persian bodies. The Persians had been defeated. Diodorus of Sicily reports that the Persians lost 200 ships and the Greeks 40.

During the naval battle, Aristides in a parallel operation landed in Psyttalia with a group of select Athenian hoplites and destroyed the Persian garrison.

Xerxes, ashamed of the defeat, took refuge with the remnants of his fleet in the Hellespont. In Greece, his general Mardonios remained with 300,000 men to continue the fight. The Persians had not yet had their last word.

The glorious victory of the Greeks is largely due to the strategy of Themistocles and the superior naval art of the Greeks. The Athenian politician and general was awarded exceptional honours.

When he once attended the Olympic Games as a spectator, all those present adored him as the saviour of Greece.