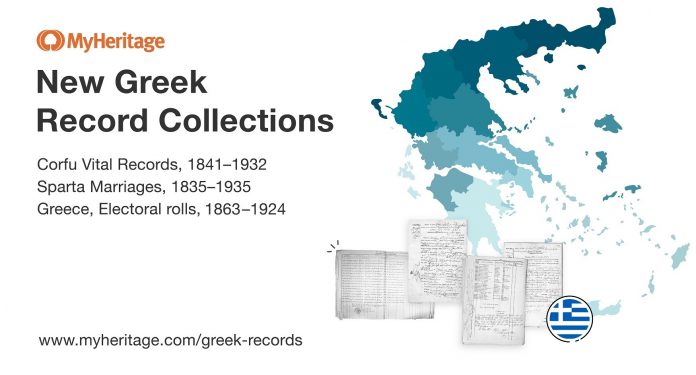 The collections comprise of 1.8 million historical Greek records in total, with all of them being searchable in English and Greek for the first time ever.

Chief Content Officer of MyHeritage, Russ Wilding, said the records will be an invaluable genealogy resource for family history enthusiasts who have Greek roots.

“As the cradle of western civilisation and a crossroads of continents and cultures, Greece is becoming a gem among MyHeritage’s historical record collections,” Wilding said in a press release.

“The records in these collections are rich in detail and have pan-European, Balkan, and Mediterranean significance. This will prove valuable both to novice researchers and experienced genealogists.”

While searching for all three of these Greek record collections is free, a subscription is required to view the full records and to access Record Matches.

This collection consists of 1,006,594 records and provides nationwide coverage of males ages 21 and up who were eligible to vote. They list the voter’s given name, surname, father’s name, age, and occupation. Each record includes the individual’s name in Greek, and a Latinised transliteration of the name that follows the standard adopted by the Greek government. Scans of original electoral roll documents are also included.

646,807 birth, marriage, and death records are included in this collection. The records were collected by the civil authorities in Corfu and document the life events of all residents of the island regardless of their ethnicity or religion.

Birth records from this collection may contain the child’s given name and surname, birth date and place of birth, name and age of both parents, and the given names of the child’s grandfathers.

A marriage record from this collection may include the date of marriage, groom’s given name and surname, age, place of birth, residence, and his father’s name. Similar information is recorded about the bride and her father.

Death records may include the name of the deceased, date of death, age at death, place of birth, residence, and parents’ names.

This final collection consists of 179,411 records which include images of the couple’s marriage license and their listing in the marriage register.

The images in this collection were photographed, digitised, and indexed by MyHeritage from the original paper documents, in cooperation with the Metropolis of Monemvasia and Sparta.