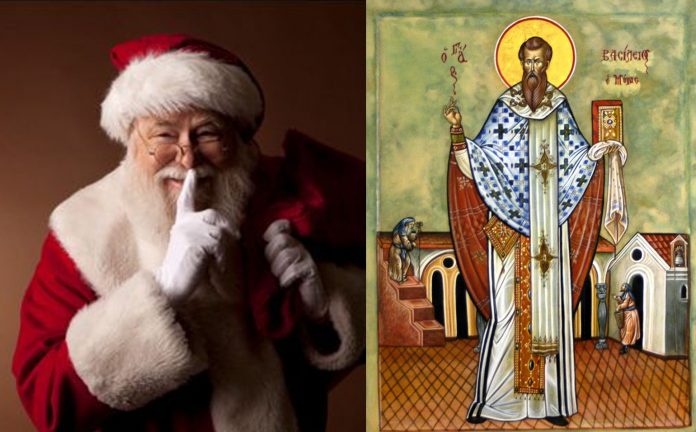 While much of the Western world looks to Santa Claus, otherwise known as Saint Nicholas, for gift giving at Christmas, Greek’s turn to Saint Basil the Great!

Santa Claus is a modernised version of Saint Nicholas, who was of Greek origin from Lycia and lived during the 4th century. Saint Nicholas was a devoted bishop known for his secret gifts, creating the model for the beloved Santa Claus.

In the early nineteenth century, Western Europeans developed the figure of Santa Claus and associated him with Saint Nicholas, thus creating a convergence between the two.

In Greece, however, Saint Nicholas was not the prominent figure related to gift giving. Instead, it was Saint Basil (Agios Vasilis), who was the bishop of Caesarea in Cappadocia. Saint Basil is known for his care for the poor and underprivileged, especially around Christmas time where he would present gifts to young children.

Saint Basil’s feast day falls on January first, and is the saint responsible for the Greek tradition of eating a Vasilopita on New Years Day.

Legend says that tax collectors once overtaxed the people of Greece to the extent that they were forced to hand over their jewellery. Declaring the action as unjust, Basil forced the tax collectors to return the gold but in order to evenly distribute it back to the public, he came up with the novel idea of baking a cake, which is now known as the Vasilopita.

Greek’s have since continued to associate Saint Basil with the tradition of gift giving. For centuries after, Greek’s would give one another Christmas presents on New Years Day, rather than Christmas Day.

While this tradition is slowly disappearing, we invite you to reflect on the history and traditions of gift giving, remembering that it was Saint Basil who made the holidays a happier time for all!