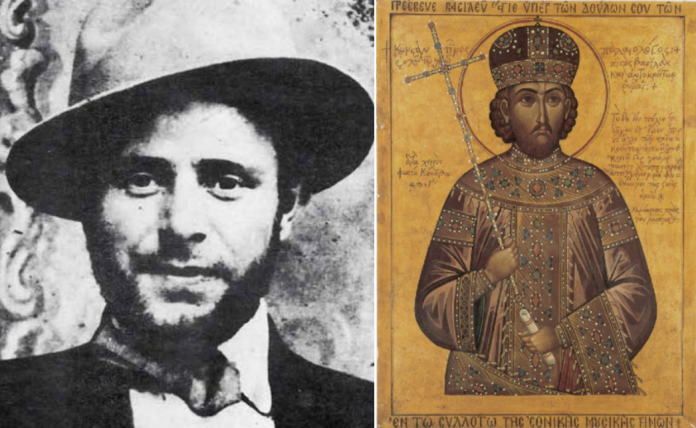 Fotis Kontoglou, the greatest icon painter of modern Greece and one of the most important theologians and literary writers, died in Athens on July 13, 1965. His death, during surgery, was deeply mourned throughout Greece.

To mark the 55th anniversary of his death, we take a look back at some of his greatest achievements.

Fotis Kontoglou was born on November 8, 1895, at Kydoniai (Aivali), on the west coast of Asia Minor, across from Mytilene. Kydoniai was a city consisting of about 30,000 Greeks and three Turks — the district governor, the judge, and the tax collector.

Kontoglou came from a devout family. Many of his ancestors were monks, and an uncle, Stephanos Kontoglou, was abbot of the Monastery of Saint Paraskevi near Kydoniai. Stephanos was an important influence in Kontoglou’s life.

In his book Vasanta (1923), Kontoglou dedicates the chapter of translations from the Psalms of David “to the austere soul of the Hieromonk Stephanos Kontoglou, my uncle, whose virtue I perpetually have before me as a model and rule.”

After graduating from the famous Academy of Gymnasium of Kydoniai, Kontoglou spent several years in Europe, especially in France, studying art and acquiring painting techniques. He lived in Paris during the First World War, where he first gained attention, winning prizes for his paintings and his writings. His first book, a novel entitled Pedro Cazas, was written and published there in 1919.

After the armistice, Kontoglou returned to Kydoniai. But after being persecuted by the Turks, he and his family went to Thermi, Mytilene, in 1922. Later he resided in Athens, where he wrote and published a remarkable prologue for the second edition of Pedro Cazas, making him well-known in literary circles.

His reputation as a writer grew with the appearance of two additional books: Vasanta (a Sanskrit word meaning “springtime”) in 1923, and Taxidia (“Travels”) in 1928, and the literary and art periodical Filikh Etairia (“Friendly Society”) which he founded in 1925.

Between 1942 and 1945, Kontoglou also wrote at least eight books. Most are rather short. The longest and important is Mystikos Kepos (“Mystical Garden”) in 1944. His chapters on Piety (Theosveia) and Saint Isaac the Syrian are masterpieces, full of deep religious feeling. He speaks of other remarkable ascetics of Syria and Mesopotamia, and stresses the virtues of faith, humility and purity.

In 1961, he published a long, luminous and spirited defense of Byzantine art in the monumental two-volume work entitled Ekphrasis (“Expression”) in which he teaches the theory and practice of Byzantine iconography.

After leaving Europe, Kontoglou became increasingly impressed by the Byzantine traditions of painting and decided to master this style of painting. He did this by reading old manuscripts and visiting Byzantine monuments at the Holy Mountain of Athos and at Mystra, patiently studying the works of the old masters.

In 1932, Kontoglou published a slender volume entitled Icones et Fresques d’Art Byzantine, with twenty plates of Byzantine panel icons and frescoes he copied. He continued to paint panel icons during this period.

During the later thirties, Kontoglou decorated three large rooms of the City Hall of Athens with historical frescoes. This was his first large scale work as a fresco painter, and his only extensive secular one.

The most fruitful period for Kontoglou as a painter was the last twenty years of his life. He painted numerous panel icons in churches in many parts of Greece and the United States. Specifically, he painted fresco icons and wall paintings for Agia Varvara in Egaleo, the new Metropolitan Church of Evangelismos in Rhodes and the Church of Saint George at Stemnitsa, Arcadia.

Through these works, Kontoglou succeeded in making Byzantine art prevail in Greece.

Kontoglou died on July 13, 1965 due to the complications caused by a car accident. He is considered one of the most important visual artists, who opened new avenues in Greek painting. His rich literary work remained largely militarised for the Christian cause, but his early works and especially the novel “Pedro Kazas” remain popular to this day.