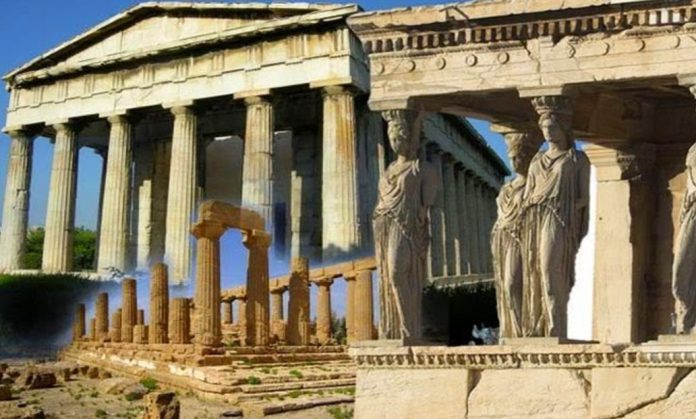 They stand proud for centuries, reminding all humanity of the greatness of Greek culture. The ancient Greek architects were excellent craftsmen and built temples and monuments that impress people even today, a millennia later.

Despite the hardship, wars and disasters, many ancient temples managed to be maintained in good condition.

The temple in Greek antiquity was the residence of the god, the building that housed the cult statue of one or more deities. The faithful gathered in the surrounding area outside the temple building, where the altar was located, for the offering of sacrifices and the practice of worship.

The Parthenon is the most brilliant monument of the Athenian state and the colophon of the Doric style. Its construction began in 448/7 BC and its inauguration took place in 438 BC. According to ancient sources, the architects who worked were Iktinos, Kallikratis and probably Phidias, who was also responsible for the sculptural decoration.

It is one of the few all-marble Greek temples and the only Doric one with all its metopes in relief. Many parts of the sculptural decoration, the entablature and the ceiling panels were painted in red, blue and gold.

The Temple of Hephaestus is one of the most preserved ancient temples in Greece. It was dedicated to the god Hephaestus and to Athena Ergani . It is located in the area of Thiseio, which got its name because of the old temple of Theseus. The temple of Hephaestus is accessible to the public, as it is part of the archaeological site of the Ancient Agora. This temple is built on the hill of Agoraios Kolonos, in the western part of the Ancient Agora.

Poseidonia was an ancient Greek colony of Lower Italy in the region of Campania. It was located 85 kilometres southeast of Naples in the present-day province of Salerno, near the shores of the Tyrrhenian Sea. The main feature of today’s archeological site is the three large temples of Doric style. They were dedicated to Hera and Athena. The Temple of Hera is the oldest surviving temple in Poseidonia (also called Basilica) and belongs to the 6th century BC.

The area of ​​the Erechtheion was the holiest of the entire Acropolis. A complex marble building, it is a brilliant example of the mature Ionic style. The eastern part of the temple was dedicated to the Athena Polias, the patron goddess of the city, while the west was dedicated to Poseidon-Erechtheus, from where the temple was named. It was used as a multiple temple, where older and newer cults were co-located and where the Holy Martyrs were kept, with traces of the trident of Poseidon and the olive tree, the gift of Athena to the city ​​of Athens.

Temple of Zeus in Kyrenia

The Cyrene in ancient times was the Greek colony in North Africa. It was founded in 630 BC from the Thera , while it took its name from the source Kyri, which was dedicated to the god Apollo. It quickly developed and evolved into a centre of Greek culture in North Africa, while it was also a major commercial center. In the 3rd century BC, the philosophical School of Kyrenia was founded in the city by Aristippos, a student of Socrates. The Cyrene has been a UNESCO World Heritage site since 1982. Ancient monuments are preserved in the city, such as the temple of Apollo (7th century BC), the temple of Demeter and a temple of Zeus, which was partially destroyed by order of Muammar Gaddafi in 1978.

The sanctuary of Poseidon

The sanctuary of Poseidon is located inside the fortress that protected the coasts of Attica and the mineral zone. Mining facilities, houses, farmhouses, roads and cemeteries have been found throughout the municipality. A large cemetery of geometric and classical times extends to the west coast of the cape.