Damaged tombstones from cemetery in Thessaloniki returned to Jewish community 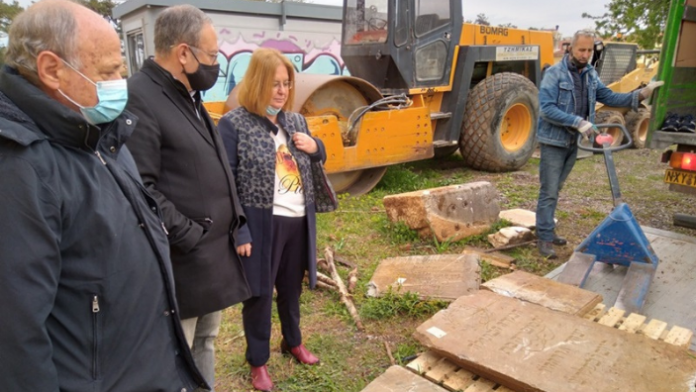 Marble tombstones that were a part of a damaged former Jewish cemetery in Thessaloniki, northern Greece, have been presented to Jewish community by the local and archaeological authorities.

The tombstones were found during a digging project to create a metropolitan park in the current suburb of Pavlos Melas.

The pieces of stone were dated back to the 20th century, according to the Ephorate of the City of Thessaloniki Antiquities and are said to be of great cultural value to the city.

“The destruction of the Jewish cemetery of Thessaloniki and the abhorrent looting of the deceased Jews of our city took place in December 1942, by the then occupying German forces,” said the municipality in a statement to local media.

“The materials of the destroyed cemetery, especially the marbles, were then used as construction material in several projects of the city, and this is how they ended up at the camp,” They continued on to say.

The Mayor of the Pavlos Melas municipality, Dimitris Demourtzidis said the work for the park continues at the former camp.

“We learned with sadness and anger that the Jewish cemetery was turned into a massive area of destroyed tombstones and dispersed bones of the dead,” said Mr Demourtzidis.