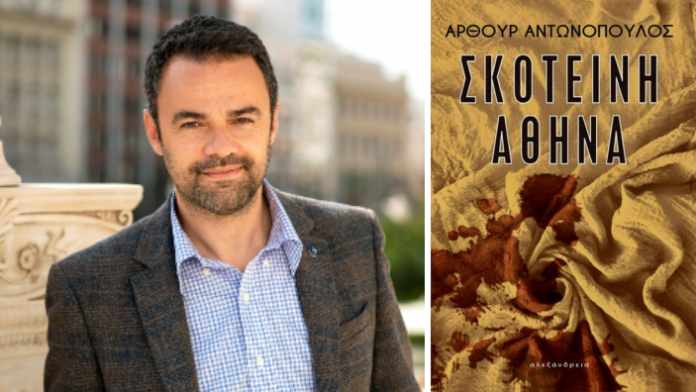 While most Greeks travel to Australia in search of a better life, something was bothering Arthur Antonopoulos and in 2000 he decided to leave Melbourne, his parents and his beloved cricket, to settle in the land of his ancestors.

He led an adventurous life plucked from the pages of the Beatniks generation and today delivers its core to the public: The book ‘Dark Athens,’ surrounded by a haze of mystery, which is enough for the reader to baptise him as the Greek Australian, Dan Brown.

Athens of 1932 dances a passionate tango with Athens of 2009. That’s when the flames of protest over the economic downturn sparked a wave of demonstrations. In one of them, Arthur Antonopoulos participated with a friend.

“I was accidentally in the centre of the city when it was burning. We walked a lot that night, in various parts of the city and noticed the first symbols and monuments, which are the main material of my book,” Arthur Antonopoulos tells The Greek Herald from a small cafe near the Australian Embassy in Athens.

“The stop of time” is the name of the cafe and reveals what state the Greek Australian writer is currently in. At a time, when everything has stopped so that he can enjoy his unexpected success.

The book was released a few weeks ago and already the first edition sold out.

“I didn’t expect it. It came fifth in sales when it was released throughout Greece. It exceeded all expectations I had,” says Antonopoulos, whose parents continue to live in Melbourne.

“They were greatly moved when I sent them the first copy with the dedication I wrote for them. They understood that I came to Greece with a purpose and that I succeeded. That my labours bear fruit.”

The expatriate writer is now looking for ways to publish the English version of the book.

“It’s hard, because I’m starting out of nowhere. People will have to teach me first. To see that I worked hard. I am taking steps to find a publishing house to distribute my book abroad but it is still early for that.”

The plot of ‘Dark Athens‘:

With influences from the American writer, Steve Berry, the prolific, Arthur Antonopoulos already has his second book ready. The first, ‘Dark Athens,’ however, has already created a group of loyal fans, trying to solve its puzzles.

“The plot unfolds in Athens in 1932, where many excavations and erections of important monuments were carried out. In 2009, I started writing the book and I wanted it to be a police novel with a historical background, with which I would guide the tourist who comes to Athens and convince him that this is not a city they could see three days. Through the novel we learn about underground Athens, its symbols and its history,” says Antonopoulos, whose book is the result of personal research.

“This is the story of Ariadne, who returns to Athens when a major newspaper gives her a unique professional opportunity. An interview with the Prime Minister, Kodros (the first King of Athens).

“There begins a mystery story. With her life in danger, she discovers that a symbol she sees everywhere around her, in the streets of Athens, in ministries, flags of countries and large multinational corporations is not accidental.

“It is only the beginning of a new world reality… Most characters are based on real people, the plot is a creation of my imagination, but anything that refers to historical events and places in the city is the product of research.”

Now, his immediate plans are to travel to Thessaloniki for the research of the second book of the trilogy: The ‘Dark Thessaloniki.’

The return to Australia:

Memories of his childhood are interspersed with beautiful pictures. Even the “mountain” of three-hour Greek learning in a Melbourne tutorial seems ideal today.

“At the time I didn’t like it. But today, I understand that it was necessary. I had a very beautiful childhood. I used to go to a school where most of the kids came from immigrants. We played cricket and Australian football in the neighbourhood for hours. I received a lot of love from my parents,” recalls Antonopoulos, who wasn’t sure he wanted to be a writer when he was little.

“I didn’t know what I wanted to be. I studied at the University of Monash in the Department of Fine Arts. In the fourth year, Mr Andronikos, who was the Head of the Department asked me if I wanted to do an investigation into the “Blue Book” of Stratis Myrivilis. He was a journalist in the First World War under the pseudonym “Small Pencil”. So I got a scholarship to Greece and started my research on him.

“It was then that I fell in love with the blue sky and the fine weather of Greece. My love especially for Athens began in 2007 when I first thought about the idea of the book.”

Is he now thinking of returning to Australia? “Not for permanent residence. However, in May there is the Antipodes festival and earlier the “writer’s festival” will be organised, so I will try to combine a visit for these occasions”.

Although the chaos of Athens is disorganising its resident, Arthur Antonopoulos was not affected in any way. “The mess suits me, though I want to be tidy in my life. Maybe because I want to put the mess in order.

“In Athens I feel alive, in Melbourne I rest,” says success-driven Arthur, who most likely will become now a full-time writer.

“I’ll risk it. And my father took a risk when he came to Australia. This is what I will do,” he tells us and it is like telling the perpetual history of Hellenism, the pioneers of new pursuits…