What’s on for Greek Independence Day around Australia this year 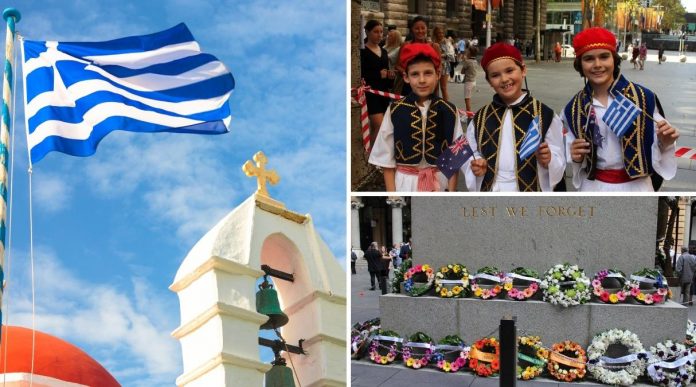 It’s that time of the year again as Greek communities across Australia prepare to celebrate the 201st anniversary of the start of the Greek War of Independence.

With many events planned, The Greek Herald has the lowdown on what you can attend over the next few days to mark Greek Independence Day.

In New South Wales, celebrations kick off on Thursday, March 24 at 6pm with a flag-raising ceremony organised by AHEPA NSW Inc. The ceremony will be held in the forecourt of Bayside Council and will be followed by a celebration at AHEPA NSW Hall in Rockdale.

On Friday, March 25, Canterbury Bankstown Council is holding an ‘Independence Day Celebration’ which will feature live music, speeches and a flag raising ceremony. The event will take place in front of the Anzac Monument on Homer Street, Earlwood at 4pm.

At 7.15pm on Friday, March 25, the ‘Authentis’ free concert dedicated to the 30th anniversary since His All Holiness Ecumenical Patriarch Bartholomew will also take place at Sydney Town Hall. Themos Mexis will conduct the National Metropolitan Choir of Australia, while there will also be performances from The Sydney Youth Orchestra, soloists Sandy Constandopedos (vocal), Tassos Lambrou and Andrew Belekas (bouzouki) and Antonis Petrandonakis (lyra), as well as The Sydney Thistle Highland Pipe Band and the Hellenic Lyceum Youth.

On Friday, March 25, the Greek Orthodox Community of NSW (GOCNSW) will also be holding a public Cocktail Party from 7pm at the Community’s Club in Lakemba.

The next day, on Saturday, March 26, the Hellenic Art Theatre’s production ‘The Promised Woman’ will premiere at The Greek Theatre – Mantouridion in Marrickville at 7.30pm. The play is by Theodore Patrikareas and directed by Stavros Economidis.

The Kytherian Association of Australia (KAA) will also hold the official launch of its centenary celebrations on Saturday, March 26 at the Australian National Maritime Museum. The festivities will kick off at 7pm and guests will be treated to entertainment by local band IHO Nyx, as well as deluxe canapes and beverages (excluding spirits). On the night, guests will also have a chance to take part in an auction of the Collector’s Edition Medallion, which was designed by young Kytherian, Zoe Sophios.

On Sunday, March 27 there are also a number of significant events in Sydney. These are:

On Friday, March 25, the Greek Community of Melbourne and the Greek National Day Council of Victoria, in association with the the Greek Orthodox Archdiocese of Australia, are holding the inaugural Grecian Ball. Starting at 6pm at the Grand Hyatt Melbourne, the event has been promoted as “a gala night filled with Greek entertainment.”

Earlier this week, around 500 people also gathered at Melbourne’s Shrine of Remembrance for a wreath laying ceremony to celebrate Greek Independence Day.

Tonight at 6.30pm, there will also be a special event hosted by the Consulate General of Greece in Melbourne at the Hellenic Museum.

On Sunday, March 27, the Greek Orthodox Archdiocese of Australia (Archdiocesan District of Adelaide) will hold a number of events to mark Greek Independence Day.

At 7.30am, there will be a Matins, Divine Liturgy and Doxology in the Church of Saint Spyridon, Unley, celebrated by His Grace Bishop Silouan of Sinope.

At 12.30pm, there will be a Memorial Service at the War Memorial, North Terrace, officiated by Bishop Silouan. Afterwards, beginning with the Hon. Consul General of Greece in Adelaide, Mr George Psiachas, wreaths will be laid in honour of the fallen by SA’s civil and military authorities, as well as representatives of the Greek Community organisations.

The Greek Orthodox Community of South Australia Inc. (GOCSA) will also be commemorating Greek Independence Day on Sunday, March 27 from 11am. The event will be held at the Cathedral of Archangels Michael and Gabriel in Adelaide and will involve wreath laying, as well as a number of school presentations.

The Greek Orthodox Community and Church of Canberra (GOCCC) have organised a number of events across the city to mark Greek Independence Day this year.

Elsewhere, a number of buildings across Canberra will also be lit up in blue on Friday, March 25 including the Greek Embassy in Australia, the Hellenic Club of Canberra and the National Museum of Australia, among many others. At 7pm on the night, the Canberra Hellenic Dancers will be performing at the National Carillon Bell Tower as part of a mini ‘Greek Enlighten Festival.’

On Sunday, March 27, GOCCC are also holding a Doxology at St Nicholas Greek Orthodox Church in Kingston, followed by a light luncheon and wreath laying service at the Hellenic War Memorial.

In Western Australia, the Consul of Greece in Perth, Georgia Karasiotou, is inviting the local Greek community to attend a commemoration event to be held on Sunday, March 27.

The commemoration will begin at 10.30am with a Doxology at the Greek Orthodox Church of Sts Constantine and Helen in Northbridge.

This will be followed by a wreath laying ceremony at 12.30pm at the State War Memorial in Kings Park. The ceremony will be held in the presence of the Honourable Kim Beazley AC, Governor of WA.