What does ‘OXI Day’ mean to you? Adelaide High Greek Class students respond 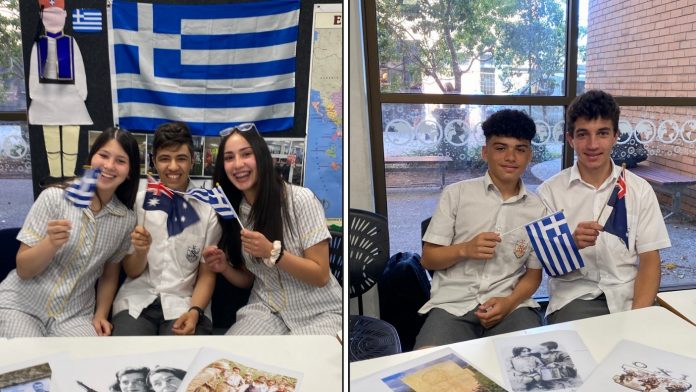 What is ‘OXI Day’ and why is it important to commemorate it? What’s the historic connection between Greeks and Australians and how does the new generation perceive this significant part of history?

“Born in 1909, in Karitsa, Lakonia, pappou was a trumpeter in the army where he was able to deliver messages and encourage his fellow patriots. What he witnessed and went through while on the front must have been unimaginable and changed him for the remainder of his life.

“Upon his travels on the front, however, Pappou found 40 Italian conscripts hiding in a cave, freezing from the elements and scared about the fate that awaited them. He confiscated their weapons but then proceeded to light a fire to keep them warm and comfortable. He informed the captain and the 40 men were kept as prisoners of war. Although a very tough man, hailing from the mountains of Lakonia, my pappou never killed anyone, ensuring the greatest victor of his war was humanity.

“It is imperative to mention however, that while my Pappou was on the front, my yiayia Katerina, was left like many women, at home where all duties and responsibilities rested on her shoulders. Much to his children’s delight many years later, they recall with much fondness two mules that their dad returned back from the war with.”

In 1941, 6,500 ANZACS and 30,000 British troops landed on the island of Crete, helping fight against the Germans. They fought for 13 days until the Germans occupied Rethymno. Although some soldiers sent to Crete were evacuated and sent to Egypt, many ANZACS were left behind.

Through the tragedies of the Battle of Crete, the Australians and Greeks established a close bond of friendship that did not come to an end with the death of the veterans but continues to this day.

Learning about the disasters of war and about the friendships that grew during the hardship has opened our eyes and made us feel grateful that we are where we are today because of others’ sacrifices.  Lest we forget.

In 1941, approximately 34,000 ANZACs fought alongside the Greeks on the island of Crete. Despite the language barrier, the Greeks and the ANZACs treated each other with utmost respect and worked together to defend Crete from Nazi Germany occupation.

Both Greek and ANZAC soldiers sacrificed themselves, their families, and their homes to represent and fight for their countries. All citizens of the island, despite age and gender, worked in unity.

We feel a great sense of pride to be able to call ourselves Greek and feel extremely thankful and forever in debt to the Greeks and ANZACs who fought for us and put their lives on the line for us to be here today.

The involvement of women throughout the war had a large significance in the assistance of supply distribution to the warfront in the mountains. Women carried supplies up the inhospitable mountains, while on the way down, they would carry injured men to safety. The courage of the women of the war, in Particular the women of Pindos is to be commended as they battled the elements, snow, gunfire and bombs.

Knowing that our ancestors sacrificed their lives for us to live today is very humbling as we have been gifted the opportunity to live in a lovely free country.

The message demanded that Metaxas should surrender to the axis powers within 3 hours after receiving the message. To which Metaxas responded with: “Alors, c’est la guerre” translating to “Then it is war”. This short phrase quickly became known as a simple: Oxi.

This act has broadened our view towards how courageous and brave Greece was at the time, especially towards such a tremendous threat.

During 1943-1944 Germany occupied Greece, including the island of Zakynthos. It was an island filled with unity and a home for Greeks; Christians and Jews alike.

The Germans were after all the Greek-Jews, but Bishop Chrysostomos and Mayor Loukas Karrer had protected them by handing over the names of two citizens; their own. Resulting in all 275 Greek-Jews continuing to live on despite the fact that the people of Zakynthos could have exposed the community to save themselves.

Learning about this topic has made us thankful for the courageous acts from Bishop Chrysostomos and Mayor Loukas Karrer and that humanity was the overall victor on the Island of Zakynthos.

Although the Greek army lacked much of the artillery of the Italians, along with the citizens, they looked after each other as if they were one family. When Italy invaded Greece on October 28, 1940, Greece although outnumbered fought very hard and pushed the Italians back into Albania.

Hearing this really empowered us to live our life to the fullest and it made us really appreciate the sacrifice made by our ancestors to give us a better life.

The Greek children played a vital role during WW2, arguably, just as important as the role of the soldiers. They assisted in supplying the troops with the limited food available.

Even during the occupation, the Greek children worked alongside the resistance, and although some of them did not get to live to see the result of their sacrifices, we will never forget what they did for us.

Many of the surviving children of the war were forced to migrated to Australia and other parts of the world for a better life. They are our pappouthes and yiayiathes and we will always be in debt to them.