Vasili’s Taxidi: When Only Fresh Fish Will Do… Every Day at North Terrace Fish Market, Bankstown 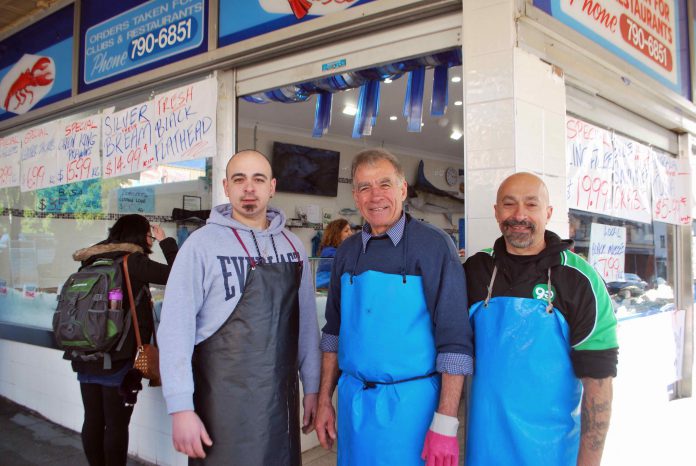 The Greek connection to the sea is innate; the Mediterranean Sea is our home. It is only natural for Greeks and seafood to be synonymous; they have been catching and cooking seafood for millennia. In Australia, what an incredible role the Greeks have played in introducing so many seafood delicacies! So many old fish market owners can recall the times when Australians would not go near octopus or calamari…

Across Sydney, Greeks have been running seafood shops for decades and decades, and one of the busiest seafood shop in the Bankstown area is undoubtedly the North Terrace Fish Market which is run by the Violaris family.

Everyone in the seafood industry says, ’Customers love fresh fish!’You cannot miss North Terrace Fish Market in Bankstown as the huge mural of a fishing caique reminds you of an image of Cyprus or a Greek island. Experiencing this extremely busy fish market is unque; if you were to turn up at 9.20am, it is deceptively quiet with very little happening. This is because all the locals know that Christos is on his way back from Sydney Fish Markets’ auctions; as soon as the locals see his truck arriving at the North Terrace, they flock to it and the shop becomes very busy very quickly.

And what is amazing about this is it happens every day; Christos goes down to Sydney Fish Markets’ auctions, and he only buys seafood for one day’s operation, to ensure customers have fresh seafood… every day. And Christos is undaunted by it all because he has been doing this early morning run for decades.

Personally, I was very impressed on how well run North Terrace Fish Market is run; as soon as Christos drove in, it was as though all of Bankstown was waiting for him. All the seafood was unloaded, the fish were gutted for fillets- and all the cutting happened on the premises before your eyes- and everything was put on display so quickly. And the shop suddenly packed out! All of Bankstown swarmed down to North Terrace Fish Market! There were people everywhere!

Gabriel recounts the busy process at 9.30am every morning, ‘Once the truck arrives and everything is unloaded, there is a lot work that has to be done! I put out all the whole fish on display, while my brother, Anthos, puts the prawns on display. While we are doing this, my father is already at the sink, cutting the fish. Once I finish putting the fish on display, I begin working on the sink too… it is very busy! When there is a back up of fish, ready to be cut, you just keep on going! Your hands keep moving quicker… to get everything done.’

The Violaris family come from Vatili, Cyprus. As Christos worked as a bus driver there, the family desperately fled the advancing Turkish troops, during the invasion of Cyprus (1974), on a bus and became refugees. The Violaris family subsequently migrated to Australia, where Christos initially worked in Nikos and Andrea Papakostas’ seafood shop in Auburn.

Nikos then sold his seafood stall at Flemington Markets to Christos and the Violaris family would eventually buy the Auburn seafood shop. In 1991, Christos bought the North Terrace Fish Market and he has run it ever since. These days, his sons Anthos and Gabriel work in the shop too.

For such a busy shop as North Terrace Fish Market, a lot of hard work and many long hours are needed. Families such as the Violaris’ have worked so hard to build such a great reputation; all of Bankstown knows them for their fresh seafood. A lot of customers’ trust is based on the knowledge Christos goes out to Sydney Fish Market… every morning; that merely shows the Violaris’ strong work ethic and commitment to their customers.

And visiting North Terrace Fish Market is the afternoon and it is very quiet and all the displays are empty… a sign that it has been such a busy day! And the Violaris family will do it all again the following day… again.

And what keeps Christos going after all the decades is his passion and love for seafood and the business; after almost thirty years in the seafood retail industry, he still gets an adrenaline rush at Fish Market auctions and his smile tells you he got a good deal for the day’s high quality seafood and the customers will be happy with this.