Vasili’s Taxidi: A Snip, a Clip and Everything Greek at Steve and Angela’s Unisex Salon 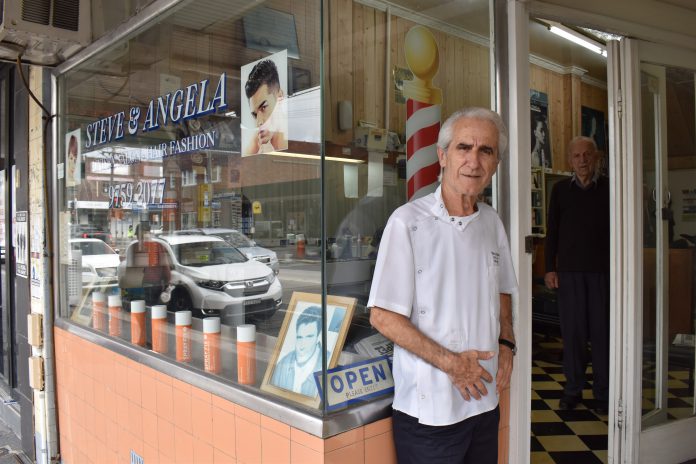 With the mass migration of Greeks to Australia after World War II, came a diversity of tradespersons coming here; Where Greeks settled in large numbers across Sydney, this prompted the opening of diverse Greek owned shops because there was a market for them- as newly arrived migrants felt more comfortable communicating with someone over the counter who could speak Greek and understood their sensitivities and the way they wanted things done. One of these businesses were the Greek barbers and hairdressers.

Walking into Steve and Angela’s Unisex Salon in Belmore, you know that you have entered a Greek shop! And I have to immediately emphasise to our barber, Stavros Kulumundris, that I am a barber’s worst customer!  You have to love Stavros’ decorative newspaper clippings across the top of the wall whether they are about Sydney’s iconic soccer team, Pan Hellenic of the 1960s, or Greece winning Euro 2004.

On the waiting table are the Greek newspapers which he states, ‘Ever since I started cutting hair as a barber in my father’s shop in Redfern in 1966, we bought the Greek Herald for our customers to read while they waited. We bought it every day and I continue to buy it every day, after 54 years!’ I try to calculate how many editions that would be, and there are too many zeros, so I give up.

In the mid 1960s, Redfern and the inner city was bustling with Greeks. As Stavros recalls, “So much of the Greek community was within walking distance; up at Taylor Square, you could go to Baveas Delicatessen and the Athina Cake Shop; the Holy Trinity and Agia Sophia Churches were close by; Pan Hellenic Soccer Club played at Wentworth Park, Glebe; the Lawson Theatre in Redfern played Greek movies; there were all these Greek night clubs such as ‘Vrachos’, ‘Kalamata’, ‘Pyrgos’, ‘Deilina’ and ‘Patris’.”

It was inevitable that Stavros would open his own barber shop, and he did so on Frenchmans Road, Randwick. In 1976, Stavros married Angela Liaropoulos, who was a hairdresser. This dynamic duo was subsequently born and when an opportunity arose for Stavros and Angela to establish their own business, they did so in Belmore. Their unisex salon was separated into two sections with the barber shop in the front while the hair salon was in the rear.

Stavros has seen all the hairstyle fashions over the years. Being a continental barber, it was initially difficult for him to accept ‘strange’ hairstyles but he gradually got used to the ‘stranger’ ones. Fortunately, fashions often do 360 degree turnarounds and continental haircuts came around and became fashionable again.

Being in a business that deals with all sorts of people, Stavros looks back on customers’ loyalty and all the friendships that developed over the years, “Through the barber shop, I have developed friendships with so many people over the years. And I have so many loyal customers who have been coming for years. Lots of customers open their heart to you and express their pains in life. I just listen; what can I do? I hear about deaths, divorces, illnesses…  All I can say is something positive to soothe their sorrow.”

And, finally, I ask Stavros how long he will continue running Steve and Angela’s Unisex Salon, and he replies, “Time passes and we are not getting any younger. My arms do get tired, cutting hair all day. Standing all day hurts my back too. As long as I can continue working, I will work. This is where I will get my Leaving Certificate. One day, we will retire and Angela and I will return to Greece. I would love to spend time on my island, Kos, the island of Hippocrates.”

And as I farewell Stavros, he just had to give it one more try, “Vasili, you need a haircut…”