‘Unforgettable’: Greek Australians share how it felt to return to Greece for summer camp 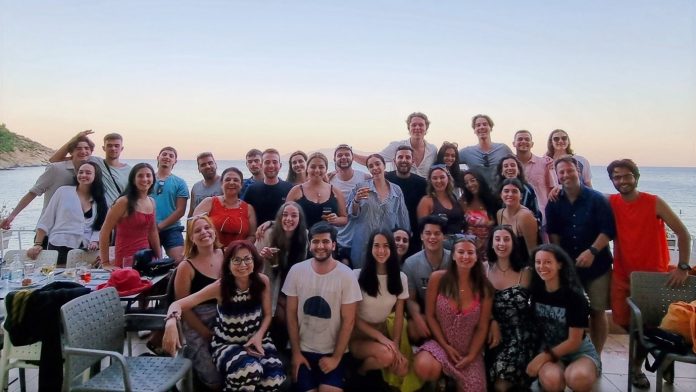 Greek youth from across Australia have returned from the inaugural Greek Summer Camp in Thessaloniki, Greece and they can’t wipe the smile from their faces.

Words such as ‘unforgettable’ and ‘one-of-a-kind’ are being used to describe the camp, which was launched by the Greek Community of Melbourne (GCM) this year in cooperation with the Greek Ministry of Foreign Affairs (GMFA) through the General Secretary of Public Diplomacy and Greeks Abroad.

To find out more, The Greek Herald spoke with three Greek Australians who participated in the summer camp and this is what they had to say.

As a Greek living in Australia, it’s always an amazing experience to go back to the motherland, but to go on a camp with over 30 Greek Australians of the same age group led to an even better immersion. After spending 12 days together, everyone had their special part in the group whether it was doing a flip while Greek dancing or saying ‘να σου πω’ over 1000 times.

Going away from the group dynamics, the experiences were unmatched. From visiting the tomb of King Phillip to meeting one of the mayor’s advisors, the encounters were not something that an ordinary trip to Greece would include.

My personal favourite was the trip to Mount Olympus National Park. Surrounded by mountains and the fresh mountain air, the ability to trek into the forest and see the natural beauty of Greece was only made even more special by the group. Second to this was our opportunity to dance on the stage at the Medical Forum in front of many high-profile individuals.

Overall, my biggest takeaway from the trip is that no matter the upbringing, the Greek culture brought our group together and made the trip an unforgettable and memorable time.

I thought I knew Thessaloniki but I would newly discover a cosmopolitan mixing pot, a colourful and layered region and company to die for (well not literally, but they were fun!).

I was lucky to get leave from study on the premise that I was ‘building relations with national and international Greek community counterparts.’ It wasn’t a lie, just a favourable slice of the truth.

Despite some interactions as a group and information about our itinerary, no one knew how much we’d get out of this tour. Sure, there was cultural shock for some, a language barrier that needed massaging and traveller advice that needed sharing. But on those bus rides through mountain tops, adventures to unknown corners of Macedonia and the sheer time we spent together, we grew, we did all that and more! Everybody got something unique from our experience of Thessaloniki and I’m grateful for the different energies and interests that were brought to the table.

Having a cohort from all over Australia (Melbourne, Sydney, Adelaide and Canberra) really made it a national affair. And for me, that reinforces a perspective about our connected existence, experience and network. This tour offered me insight and access to a professional, organisational and political side of Greece that I never thought possible also.

Ultimately, we indulged in the best wine, food and conversation that Northern Greece had to offer. For the first time, we felt that Greece hosted us as a true part of the global family… the diaspora!

Fair to say that we’ll keep this coming… stay tuned.

Thessaloniki is truly a beautiful city that is easy to fall in love with. For the duration of the 11 days, I was fortunate enough to immerse myself into the Greek culture gaining meaningful insight to both ancient and modern-day Greece.

Visiting the ancient sights was truly mind-blowing and equally impressive with the architectural design’s ancients Greeks were able to construct back in the day. Walking the same path of my ancestors also felt surreal as I followed the footsteps of ancient societies from thousands of years ago. It was difficult do believe these ruins were once homes to civilisations.

Being in these ancient sights, I was able to feel more connected with my heritage and reflect on Greek history, drawing me closer to my culture. The Byzantine buildings and artworks were also fascinating to see as the growth of Greek civilisation continues. It was the Byzantian monuments around the city which make Thessaloniki truly remarkable.

The city was most beautiful, showing off its stunning atmosphere, at night. The nights were when the camp group was given free time, and naturally as young adults we took this opportunity to go out. This bought us closer together. However, it wasn’t the partying that made the night, it was the walk back to the hotel were Thessaloniki showed off its iconic monuments and landmarks. Despite how tired we were or how long the walk was, we were always looking forward to walking along the coast at night to see the White Tower and the strong statue of Alexander the Great upon his horse. It never got old, no matter how many times I saw it.

The nights were excellent bonding experiences which left us quite tired the next day but whatever the camp had planned for us, we were all passionate Greek Australians who engaged with our culture.

I would love to thank the GCM and the YMCA for their hard effort in organising and putting this remarkable camp together.