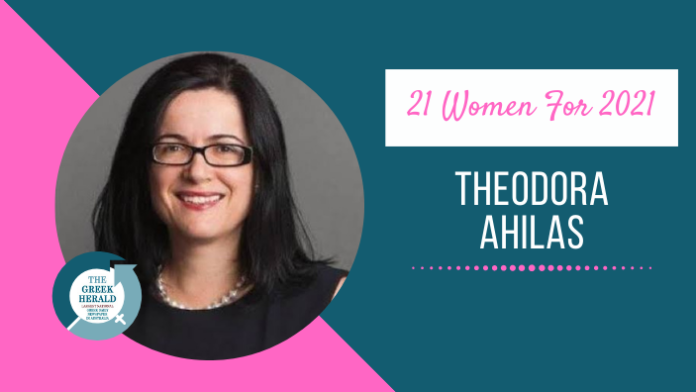 In 2021, Theodora Ahilas was honoured with an Order of Australia medal. A token of appreciation for what she has accomplished in the field of law.

But Ahilas’ impact stretches far beyond her work, impacting on people’s lives from her incredible drive to create change. Working on some of Australia’s biggest asbestos-related disease cases, Ahilas sat down with The Greek Herald to tell her story.

‘Create change from within’

Theodora Ahilas grew up in the Inner-West Sydney suburb of Dulwich Hill to working class parents. Her father, a proud waterfront worker, and mother, a tea lady in a printing firm, both migrated to Australia for economic reasons from the Island of Lesvos in the early 60’s.

“Both were obsessed with education,” Ahilas said to The Greek Herald.

“They were actively involved in and relished our achievements.”

The eldest of two girls, she attended the local high school and, apart from being a bright student, she was extremely driven and hardworking, which she says is a “common thread amongst first generation immigrants”.

“I learned early on, that change comes from within, I knew that I had to embark on a career, where I could make change and a career of service,” Ahilas said.

“I saw first-hand, the inequity caused by economic disadvantage and lack of language. That having access to the law and proper justice was almost impossible with those 2 huddles.”

Studying a Bachelor of Arts (social work) and Law, she felt that combination equipped her to serve.

“I was lucky to land my dream job in a labour law firm and in 1990, I was junior lawyer to my first asbestos case,” Ahilas sad.

“This is where my love affair began and has not left for me for 30 years.”

Theodora Ahilas has been a Principal Lawyer and Director at Maurice Blackburn Lawyers in Sydney since 2004. She is also currently the National Head of Asbestos and Occupational Diseases at the firm.

Her work with asbestos-related diseases is tied to her co-authoring, ‘Understanding Mesothelioma,’ with the Cancer Council NSW, as well as organising several fundraising events including the inaugural Bernie Banton Dinner in 2010 and 2011.

“In that time, I have witnessed the best of the human spirit, I have watched clients give their last breath in dying testimony at all hours in the day or night to secure finance recompense for their family,” Ahilas said.

“Toxic dust exposures such as asbestos and other dusts, need to be kept in the limelight, through cases, news article and media spotlight. Corporate and company wrongdoing cannot be tolerated.”

Ahilas said she has acted for “hundreds” of people of non-English speaking backgrounds, working with her team to allow them dignity during their legal process and battles.

“It has been a complete honour and privilege,” Ahilas adds.

“In my career, I have been instrumental in bridging the law and medical fields so together we have been able to provide gold quality service to the recipient and their family.”

National recognition for her services

Aged 56, was diagnosed with motor neurone disease several years ago and retired last year due to ill health.

“I feel extremely humbled, blessed and honoured to be acknowledged in such a way for a career that I have loved,” Ms Ahilas said to The Greek Herald in a previous interview.

“Greek was my first language. I experienced first-hand the difficulty of accessing services to the law and medicine when there is a deficiency in language.”

She concluded by stressing it is important that “women support women” in the legal profession, adding that mentor programs are very important.