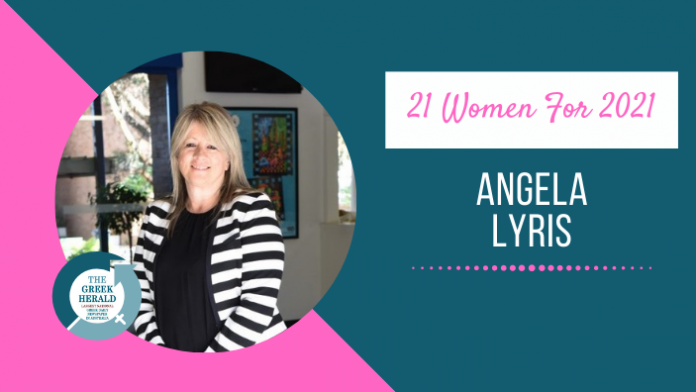 “As a principal I need to make sure that all my students believe in themselves. That once they leave school, they can stand on their own two feet,” Angela Lyris tells The Greek Herald as she details her teaching ethos. “There’s going to be challenges but there’s always a lesson to be learnt and something positive will definitely come out of their journey.”

The same can be said for Angela herself. Angela’s life looks very different to the one she would have had if she’d chosen to study law like she initially wanted to. Luckily for her however, the well-meaning advice of her Greek parents steered her on the path to being a teacher and she’s never looked back.

She’s now a well-renowned Principal at Strathfield Girls High School and Supervisor at the Kogarah Saturday School of Community Languages. More recently, she was also recognised for her work in education in the Queen’s Birthday Honours List for 2020 and this is something she says her parents, who have both passed away, would be very proud of.

“After I graduated from high school, I visited family in Greece and my uncle said I could get a job with him at Olympic Airways. I was so excited. But then I got my high school results and my grades were high enough to get into law,” Angela explains.

“So I returned to Australia and when my dad picked me up at the airport he said to me: ‘I’m proud you got into law but you’re a shy girl. Teaching would suit you better. You’ll be able to have a family and holidays.’ I’ll never forget it. But he was right and so I decided to study teaching instead and here I am today. I just know that if my mum and dad were still alive, they would’ve been so proud to see me recognised for something they encouraged me to do.”

Angela’s mum, who was from Kalavryta, and her dad, who was from Akrata, migrated to Australia in the 1950’s and worked hard to ensure their children had the best of everything. In fact, Angela says that her parents came from poor families with limited opportunities and that’s why her education and the teaching profession was so important to them.

“My parents, as well as many other migrants, came to Australia for their children and because they came from poorer families, they really valued education and teachers. I mean we’re educating young people to be the leaders of our world today. That’s pretty important,” Angela says.

It’s this message of the value of a good education which has stuck with Angela almost 40 years later. She says that in her many years as a teacher and now principal, the most satisfying aspect of her role has been working with young people and teaching them the importance of believing in themselves.

“Sometimes young people don’t always focus on the important things and that’s where I come in as a leader. I have a big responsibility in educating young people to be confident, compassionate and accepting of others,” Angela says seriously.

“My motto is ‘Dream, Believe, Achieve and Inspire’ and if I can make sure that every student is able to confidently stand on their own two feet when they leave school, then I’ll know that I’ve done a good job. I can be happy with that.”