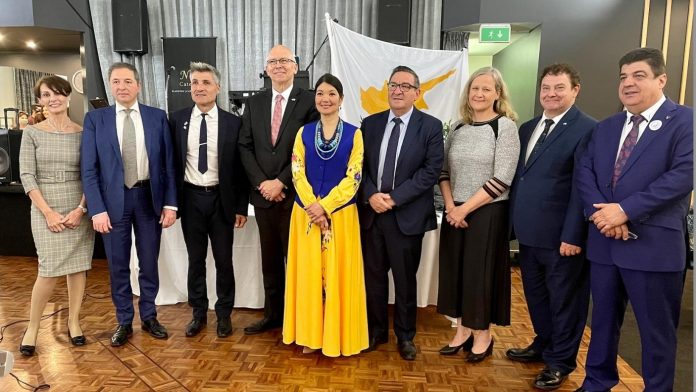 With local delicacies prepared by volunteers, music and special guests South Australia’s community honoured the 61th anniversary of the declaration of Cyprus Independence with a luncheon held on Sunday, 31 October at the Cyprus community centre in Welland, Adelaide.

The event attended over 200 members and friends of Cyprus among them the Minister of Innovation and Skills, David Pisoni, representing the Premier Steven Marshall; Assistant Minister to the Premier, Jing Lee; federal member for Adelaide, Steve Georganas; City of Charles Sturt mayor, Angela Evans; the Consul General of Greece in Adelaide, George Psiachas; Chair of SAMEAC, Adriana Christopoulos; President of GOCSA, Bill Gonis and President of SEKA SA, Peter Ppyros.

In his opening speech President of Cyprus Community, Professor Andreas Evdokiou, said that Cypriot people “have achieved independence but not the one they’ve dreamed of.”

“…For Cyprus and its people this day remains a day of reflection and concern for the future. Sixty-one years after the declaration of an independent republic, Cyprus remains divided with the Cyprus problem currently at a critical point with new challenges, blackmail and risk,” he said.

“We have a duty to continue the fight to stop the Cyprus problem. We seek a solution that will end the occupation,” said President Evdokiou before he called the attendees to a toast to the Republic of Cyprus.

In their speeches minister Pisoni, Federal Labor MP Steve Georganas, the Consul General and Charles Sturt Mayor Angela Evans highlighted the contribution of the Cypriot people to South Australia’s multicultural tapestry and commended them for their ongoing efforts to find a solution to the Cyprus problem.

“We, Greeks and Greek Cypriots have the same make and we don’t leave our rights undefended…with this persistence we will one day bring back the Parthenon sculptures and in the same manner Cyprus will get justice,” the Consul General said.

The event concluded with Community awards given to eminent members of the Cyprus community.

“Communities are getting older and we are losing a lot of our members. We need to enjoy them while we can,” said Prof. Evdokiou before together with Minister Lee he presented the community service awards to Maria Stamati, Maroula Marnerou, Antonis Marinos, Grigoris Christoforou-Orfanou, Giannis Ktoris (his son Nick received the award on his behalf) and Dimitris Kyriakou who was absent due to ill health.