Sinodinos: Australia’s economy can do better and we need more migrants to do so 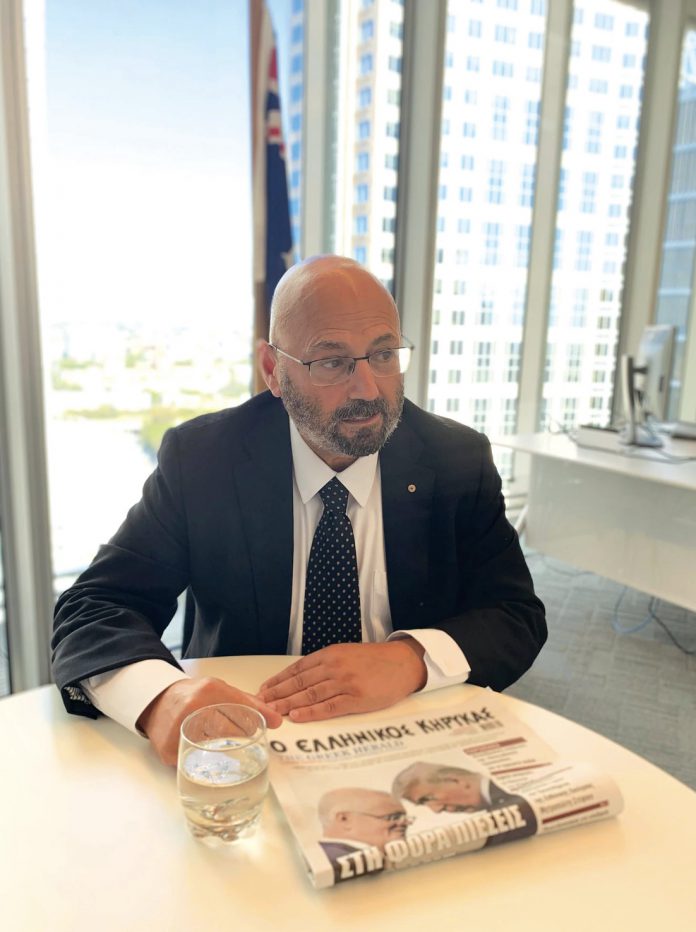 The Greek Herald held an exclusive interview with Senator Arthur Sinodinos, who will assume the role of Australian Ambassador for the US, in Washington, from the beginning of next year.

Our discussion with Mr. Sinodinos, was in light of the spectacular event organised by the Australian Chamber of Commerce & Industry, to honour Mr Sinodinos’ achievements and values. Values that are so strong, they have influenced world leaders who have governed this country, as well as the wider community, as you will understand below.

“Economically we can develop, because every time we’ve had a new group of migrants come through it’s often been the thing that gives the place dynamism, because they work hard,” said Mr Sinodinos, adding “They save, they invest, and they lift everybody else…That’s why I’ve always been a supporter of more immigration rather than less, even though there are issues that come with that like environmental congestion.”

According to Sinodinos, immigration must always go hand in hand with a country’s economic cycle, and should not be used as an alibi to deprive the local workforce. This is what the Australian government is now trying to do in line with the latest budget forecasts.

“To the extent, there’s an Australian creed, and I think part of it is ‘live and let live’ – as long as you’re not harming me, I’m not going to harm you…” he said.

“I think there’s more pride today about overtly displaying our Greekness, if you like, and that’s a good thing. Often what happens is younger kids go to Greece for the first time they rediscover their familial roots in Greece and that’s a big thing for them, it reminds them they have an identity apart from their identity here. They’re part of a broader family tree,” he said.

Mr Sinodinos believes Australia needs to become more attractive to investors but points out that the economy is still emerging from sluggishness and needs time to grow. He also recognised that the government does not give enough incentives to innovations in engineering, science, technology and mathematics. Particularly for the small number of girls who choose to work in these areas, and this is precisely an issue that he believes, needs to be addressed.

He adds that many people participate in start-up businesses but are not necessarily tech-savvy. “We’re very good at adopting other people’s technology once it’s developed, but it’s about us being on the ground for new technology,” he said.

He also notes that, in the past, Australia has been instrumental in developing innovations, such as WiFi, and so as Minister of Industry, he always felt he needed to further encourage these ideas. This is something that he is particularly interested to investigate through his role in the United States.

Regarding his expectations for the ambassador role, he says he is there to represent Australia’s national interests, and not as a commentator on Donald Trump or American politics, even though he considers American politics “the biggest show on Earth”.

One of the greatest battles Mr Sinodinos faced in his life, was his diagnosis with stage 4 cancer.

It took about 3 months, he says, to get a final diagnosis. As both of his parents had battled bowel cancer, he was sure that if he was to have a health scare, it would be something similar. His diagnosis of aggressive, stage 4 lymphoma came as a shock to all, but it did not inhibit his ability to heal.

Nevertheless, the forecast was good – as was the result. Although his recovery was not without struggle, he acknowledged that he was in the best position to fight as he had not faced the additional financial and survival problems that many families tackle when they receive a similar diagnosis.

Almost the next day after his diagnosis, he began chemotherapy and followed a particularly tiring and difficult period. In January 2018, he took a short break and then in April, underwent a bone marrow transplant. He explained that while the surgery only lasted a few hours, the recovering was the most traumatic period as his immune system was extremely weak, and he was continuously monitored. He returned to his usual lifestyle and routine in February 2019. While he lost about 30 kilograms during the process, he laughs that he has already put about 20 kilograms back on.

“It is good sense to maintain a balanced diet. It is good sense to be active. That doesn’t guarantee you won’t get something, but it’s just a good way…if you keep yourself fit you’re better to fight things that can happen,” said Mr Sinodinos.

Sinodinos confesses his biggest obstacle, that he still struggles with in his political career, is the public exposure that comes with it. The fact that everything he does as a politician, and even before he became a politician, becomes pubic knowledge is a difficult thing to grapple with. As an example, he brings up the case when all his history, even before he entered politics, was made known to the Independent Commission Against Corruption (ICAC). He admits that he process of the investigation was different from what he expected, because it was not judicial, but rather an investigation by executive bodies.

“As I said in my valedictory address…the court of public opinion quickly can become a kangaroo court. The quick response takes over from a more mature reflection. It’s binary. It’s black and white, there’s no shades of grey. There’s no nuiance, and that’s something that people have to think about carefully when they think about public life,” said Mr Sinodinos.

For Senator Sinodinos, it is the impact on his family that really concerns him when it comes to the publicity of politics. During the ICAC case, his eldest son, Dion, was hearing comments at school that affected him in a personal sense. However, he adds, at that time, the family all had a better sense of who their friends were and who they could rely on.

Mr Sinodinos had no desire to become a politician from a young age. He believes it was just something he fell into, and considers himself an “accidental politician”.

He studied economics because he wanted to understand “how the world worked”. When he graduated from university, he found a job in a government agency because he wanted to see how finances are applied to everyday real-world problems. Through a series of events, including his appointment as Prime Minister John Howard’s financial advisor, the pathway to politics opened up to him.

“I got into politics essentially through these associations but was because I was interested in policy and how things were done. That’s what politics is about. It’s not a game. It’s about getting things done,” said Senator Sinodinos.

To a young person thinking about getting into politics, he would advise him to think very carefully. “It can be a tough life. It can be quite unforgiving. But if you have a passion for it give it a go. Don’t die wondering.”

In conclusion, if he had 15 seconds to address the world stage, he would encourage people to listen more than they talk. Especially in politics, one can learn so much by listening!

Share
Facebook
Email
Twitter
Pinterest
Linkedin
WhatsApp
Viber
Print
Previous articleCustomers have quit smoking in 70% of stores in Greece, audits reveal
Next articleFormer US Ambassador to Greece claims US would turn back on Greece in event of incident with Turkey