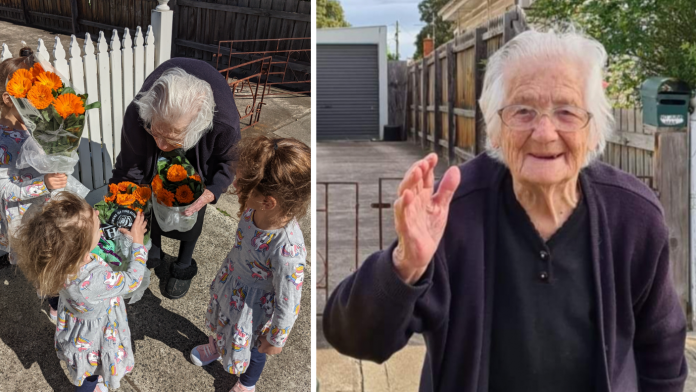 What would be a big family celebration for great-grandmother Dimitra, who turned 98 on August 15th, became a mental health check-up, a serenade through the closed car window and a bunch of flowers from her great-grandchildren outside the gate of her West Footscray home in Melbourne.

“It’s heartbreaking to try and explain to someone of her age what is going on and the reasons we are in lockdown again and all the restrictions,” Andrea Floros, Dimitra’s grand-daughter, small business owner and mother of four, told The Greek Herald.

“On the day of yiayia’s birthday I called to apologise for not being able to be there and celebrate with her, for the second year in a row. I said I can only check on her to see if she’s ok and she replied ‘How is that ok?’” said Andrea.

“I asked how has she made it this far and she replied ‘You just keep going.’”

Dimitra migrated to Australia from Kalamata in the 1950s, aboard the Patris with her husband and three kids.

“She has been through a lot. She lived through World War II and during the civil war in Greece and in the last ten years she’s lost her husband and two of her kids. She is a strong and very independent woman but it’s so unfair to not be able to enjoy quality time with her family at this stage of her life,” Andrea said.

“She watches TV but doesn’t speak English and although we try to explain to her what the situation is, she is unable to comprehend and starts crying.”

Despite growing evidence that older people are handling lockdown better, mentally and emotionally, than their younger counterparts due to their life experience, Andrea says that the mental health burden the pandemic has placed on the community’s most vulnerable -the elderly and children- is not to be overlooked.

“For whatever happens in our family, if someone for example is sick, we don’t tell yiayia because we feel like we want to protect her. She can’t meet with the family nor can she attend church like she used to and her world has changed,” Andrea said.

“There is fear, a lot of doubt and uncertainty. People in Melbourne are upset, they are judging each other, businesses are suffering and this is a really stressful situation that also has an impact on our kids. This pandemic is dividing people and I don’t think it should be this way,” Andrea said as she’s holding on to her yiayia’s advice to keep going.