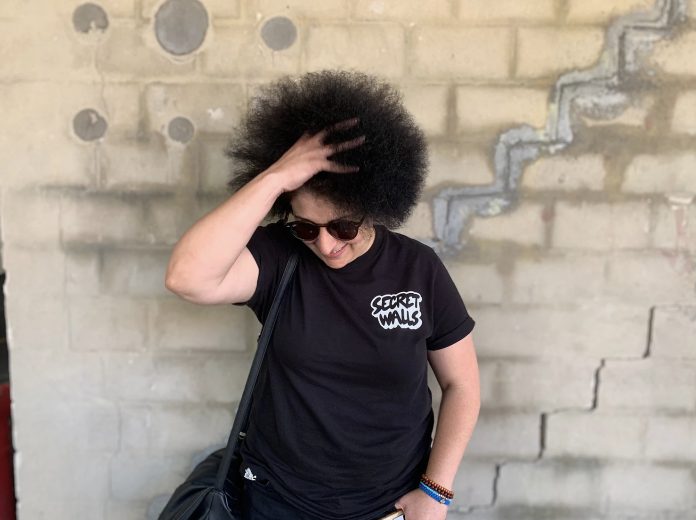 As Eirini Alligiannis roamed around New York City as an awe-inspired tourist, snapping away at the beauty of the city, she stumbled across a warehouse in an artists suburb called Five Points. The next thing she knew, she was filming an independent documentary on the destruction of the soul of New York’s art scene.

Eirini spoke to The Greek Herald about her career in the art scene that has taken her from the suburbs of Sydney to an exhibition in New York, as well as the success of her documentary and what it was like pursuing an art career in a traditional Greek household.

Did you have a natural creative flare as a kid?

I must have, because I remember playing with my mums camera when I was little. It was a film camera, back in the day. So I used to take it and pretend to take photos all the time, but she’d hide it from me and somehow I’d find it. She didn’t want me to break her favourite camera. I think it started from then really. I think I’ve always had it in me. Then I found it later in high school more than anything.

Is there a particular passion or theme that you like to take photos of? People, or things etc.

I love walking around, especially when I’m overseas, and whatever captures the moment I guess. Usually buildings, architecture. I do like to take photos of people but people get really funny about doing that.

How did you go from photography to film?

I finished by diploma in Fine Arts, and then I started doing some volunteer work for The Salvation Army, on Crown Street, called Oasis. They had some volunteer work happening for photographers to teach. From then, they had a program with Foxtel and Oasis to teach underprivileged kids how to make films, and to tell their stories. So they picked six students and moved from there…They’d get taught how to do storyboarding, camera, editing, all that stuff. So that’s how I got into it. So at the end they had screenings, and they collaborated with Randwick TAFE, they had a film course. So basically, whoever wanted to do film at the end, they gave them a scholarship for six months to attend from Spot Randwick. Some students didn’t want to continue to do it, and so I got offered a scholarship at Randwick so that’s how it all began.

So what’s been the highlight of your photography career?

Exhibiting my work in New York. Group show in New York City, it was amazing. And my work shown in Times Square as well, for one night only. It was pretty cool!

And the highlight of your film career?

It’s still going, but my short documentary has been doing amazing. It’s called Louie Gasparro: Five Points. It’s based in New York City, about a graffiti artist, and Five Points is basically the building they decided to knock down. It was a basically a place for artists to go and paint and show their art, and then developers decided to knock it down. So I got to film before it actually was knocked down.

Did you find out about the story first and then decide to film it?

No, I happened to be there. Well not happened to, I was meant to be there. My roommate at the time said, ‘you’re a photographer. We have to go to Five Points before they knock it down’. I had no idea what Five Points was, I had never heard of it. So we decided to go one day and take photos. He’s a break dancer, and personal trainer, and DJ…everything. You have to be everything in New York City. To live. So I was taking photos of him and I literally fell in love with Five Points. It’s just huge, the artworks were incredible. But, it’s not there anymore.

I decided to go one day, another day. I was going to the Moma, and nothing was happening so I went for a walk to five points to see what’s going on. So I found Louie and someone else, doing their last piece on Five Points. So I thought, this is going to be a good story. So I got on a train, went back to my apartment, got my camera and tripod, went back and set up…I just started filming him doing his last piece on Five Points. He dedicated that piece to his brother who passed away. There was meaning all around.

Where is the film at now?

It was actually selected to be at a New York Film Festival, The Cutting Room International Short Film Festival.

At the start of the year, when I was in Queens at the start of the year. The guy that does the projector came up to me after the film and asked how I shot it. I said, with my Canon 5D. Most of it was hand-held as well. The sound? He said please don’t tell me it’s the camera sound. I said yep. All I had was the monopod and the camera.

So he goes up to me and said I have to put this film in The Cutting Room International Short Film Festival. So it got selected.

I’ve always wanted to have an exhibition in New York City.

Do you like to get involved in Greek Film Festivals?

I like to go and watch the Greek Film Festivals. I should get more involved, but I haven’t yet.

Where in Greece at you from?

What is your favourite thing about being Greek?

The culture. The food. The coffee. I don’t mind keeping the traditions sometimes.

What do you think is the biggest difference between traditional Greek culture and emerging Greek-Australian culture?

They still want you to learn the language and go to Greek dancing, but when you go to Greece, we’re more traditional here than when we go back to Greece.

They think we’re crazy over here!

Did you find your family were supportive of you getting into arts?

They were and they weren’t. They were at the start, but when they find out it’s not a 9-5 type of thing, they do get a bit worried. But they’re supportive and want me to be happy.

What is the biggest risk you’ve taken in life?

Not having a 9-5 job, and just following my dreams and passions. It’s a big risk. Not having fancy cars, or going to fancy restaurants, not going out every night and missing out on a few things here and there.

I love my movie! It basically describes how something can be there, and just disappear in a second. And art is really not important to so many people in this world, but art is everywhere in this world. Kids used to go there and play, or show their creative side, and it’s sad for that not to be able to happen anymore.

Where can people watch your movie?

The trailer is on my website, and I’m working on a screening in Australia.

What is one thing that your grandparents have taught you?

I never met my grandparents…but older Greek figures taught me to have respect for people, and to treat people the way you want to be treated.

Louie (KR.ONE) Gasparro 5POINTZ was recently made a finalist at the Florence Film Festival.