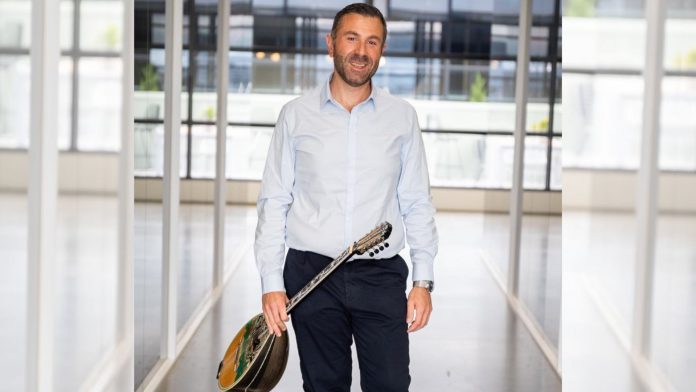 Melbourne-based musician, Pantelis Krestas, has collaborated with producer Stephen Brown, also known as Villa Dayze, to bring the sounds of the Cycladic islands to Australia.

The two artists have collaborated to create the fusion musical piece, Encircling Islands, as an ode to the Greek islands that are so special to the owner of Issamin Records, Brendan Williams.

Brendan speaks to The Greek Herald about how this record came to life with the help of Dayze and his ‘good friend’ Krestas.

1. Tell us a little bit about Encircling Islands.

Encircling Islands by Villa Dayze, featuring Pantelis Krestas, is from the heart as an open musical ode to the Greek Cyclades. A fusion of bouzouki by Melbourne-based first generation Australian of Greek decent musician, Pantelis Krestas, and musician Stephen Brown (Villa Dayze).

2. What was the inspiration behind it?

My wife, Eleni Hatzigeorgiou, is Greek and during 2019 we travelled to Greece with our two young children and her parents, who left as teenagers’ solo to travel to Australia in the 1960’s where they later met and got married. The trip was to be their final-ever Greek return trip.

It was a once-in-a-lifetime trip.

We visited Yiayia’s birth place “Moulki – Korinthos” and then travelled via various Cyclade islands including Paros, Mykonos, Koufonissi, Naxos and landed for two weeks in Samos were Pappou was raised (he was born in Ikaria).

I listened to a lot of Global Chill, as I had previously released Global compilations from some of the world’s leading day / beach clubs, and restaurants. Prior to leaving, I wanted to listen to a cross between Global Chill and traditional Greek music, none of which I could find on the various music platforms.

On the trip I saw local shows from traditional Greek musicians and bouzouki players in small towns and taverna’s and during those warm days, with crystal blue waters and cold Fix beers, I wanted to fuse the two music elements together when I got back to Melbourne.

3. How did it come to be that an Australian producer and a Greek bouzouki player came together on a track like this?

The label was already working with Villa Dayze and set about to find a local professional bouzouki player. Many Greek media contacts informed me of Pantelis, who has been involved in the Greek music industry for 20 years here and abroad, and I reached out to him to bridge the idea.

Pantelis was very interested and so we all met just prior to the Melbourne lockdown to discuss the music and to craft the idea over a Greek coffee or three.

Villa Dayze created the bedding music of the track which was inspired by his own Greek trips some years back, and then the bedding track was sent to Pantelis to create, record and add his masterful bouzouki playing.

4. What kind of story do you hope to tell with the release of this song?

The song was born from a deep love of Greece and the Cyclades, the song can transport the listener to the Southern Aegean Islands and create a sense of inner warmth and a glow and calm whilst the bouzouki acts as the hero. It’s a track that crosses boundaries.

I spent many late afternoons sitting and chatting with Pappou and Yiayia, whilst enjoying an ouzo overlooking the Aegean Sea during our Cyclades journey, and this track always takes me back to those wonderful times in heavenly Greece.

5. What else is on the cards for Villa Dayze and Pantelis?

Both musicians very much enjoyed working on Encircling Islands together and are finishing an EP’s worth of Global Greek Chill music that will continue the story.

The EP release by Villa Dayze Featuring Pantelis Krestas will extend the love of the Greek Cyclades.

Pantelis is now a good friend and we are working on his follow up release together as we had worked together on his 2021 debut self-titled EP titled N.K Compositions.

Plus, we have future projects forthcoming on a new Greek Music Record label we have created.