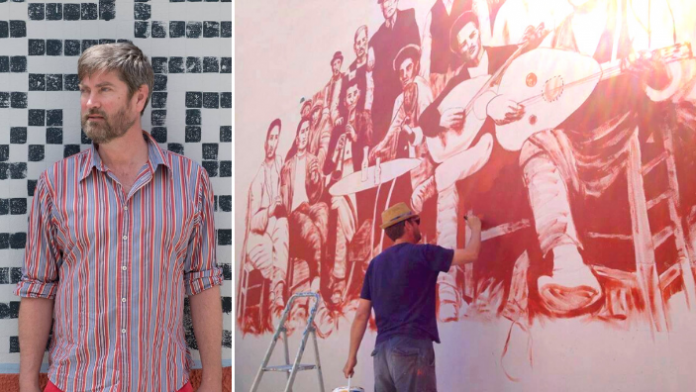 Home is where the heart is – this is not a story of a Greek who came to Australia.

Mathew was born in Sydney, mostly grew up in Adelaide but for the last ten years he calls Heraklion, home. Now, Director of The Lakkos and Ano Asites artists residencies, he uses contemporary art to attract tourists and young people to some of the island’s neglected villages.

– Where are you originally from and how did you end up in Crete?

I was born in Sydney, but mostly grew up in Adelaide. Before moving to Crete, I was living in Tallinn, Estonia for three years. Before that I lived in London. After so many years of living in cold countries, I wanted to find a place more like Australia, but still in Europe. I had some Cretan friends who lived in Heraklion. After travelling around Greece I fell in love with Crete, and decided it was a great place to make a new life.

– What do you like about Greece and specifically Crete?

I am a bit of a history nut. I love places with a long story. Athens is wonderful, but after living in a few big cities, I was keen to find a smaller one, with a slower pace of life. There are many amazing locations in Greece.

You can visit many Greek islands for different reasons, or you can just go to Crete – it has it all. Obviously the beaches are wonderful, but for me the dramatic mountains are where my heart is. Plus Cretan people are very welcoming, and lovely to spend time with.

– What does your project involve and how did you come about it?

Many artists/ writers/ dancers/ musicians come and stay for a minimum of two weeks. It has proven to be a great cultural swap. The artists and local communities both benefit in many ways.

– What is the feedback you get from the locals?

In both locations [Lakos and Ano Asites] the locals really appreciate the difference, art has brought to their places. It often leads to locals being able to show off their own arts and crafts. The cultural swap is very valuable.

Yes, COVID has been a very big problem. We had very low infections, but Crete is a place that heavily relies on tourism. Both residencies have been empty since March, but the bills keep rolling in with no income to pay them.

I took over four abandoned houses to renovate instead of paying rent. There is no money to do important maintenance. Plus the village project was very new. The locals were very sad that no new murals were being made this year. To make up for it last week I painted an old advertisement for FIX beer on the kafeneion.

– Tell us five things you found out along the way about Greece and/or Crete?

τίποτα – Because in English it sounds like teapot. It is also a nice thing!