‘Mateship and Filotimo’: Greeks and Australians in NSW gather to commemorate Battle of Crete 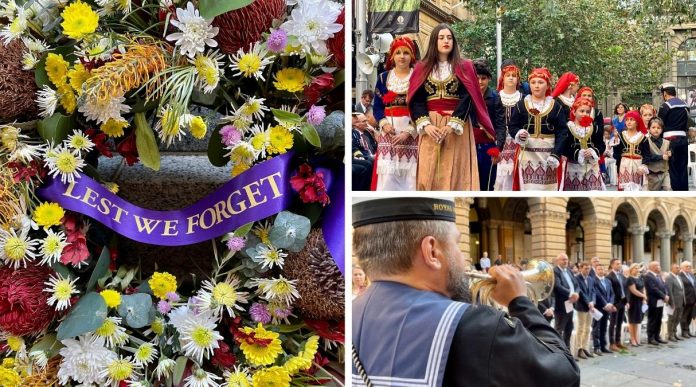 Greeks and Australians came together during the weekend to commemorate the 81st Anniversary of the Battle of Crete and celebrate the shared history and strong ties between the two countries.

The commemorative events kicked off on Friday with a cocktail party and the launch of the “Crete in the 1821 Greek Revolution” Exhibition, followed by a wreath laying ceremony and Remembrance service the next day and a liturgy service led by Archbishop Makarios on Sunday.

NSW Governor Margaret Beazley AC QC, a Military Delegation consisting of Vice Admiral Ioannis  Drymousis  Deputy Chief of  Defence, Colonel (HA) Miltiadis Militsis, Head of the 1st Department of the Public Relations, Colonel Ioannis Fasianos, Defence Attaché, Embassy of Greece in Canberra and Vice Governor of the Region of Crete, Kosta Fasoulakis, with his 10-person delegation, were among the dignitaries attending the events.

In attendance were also federal and state members of Parliament, local council and community representatives, the Consul General of Greece to Sydney accompanied by Trade Commissioner Katia Gkikiza, religious leaders and representatives of Greek Orthodox schools, cultural organisations and associations.

The commemorative events in NSW kicked off on Friday evening with a cocktail party organised by the Cretan Association of Sydney and NSW to coincide with the launch of the ‘Crete in the 1821 Greek Revolution Exhibition’.

In his opening speech, President of the Cretan Association, Terry Saviolakis, spoke about the importance of the Battle of Crete and the friendship that developed between Greeks and Australians.

“Some ANZACs could not be evacuated when the island fell, many are buried on Crete, but many also stayed until the end of the war and by that stage had become more than friends to the Cretan people, they had become family”.

Consul General Christos Karras also highlighted “the strong bonds of friendship and mutual trust and respect that were forged during the two World Wars.”

The event included a number of speeches while those in attendance had the chance to enjoy Cretan mantinades (folk songs) from musicians Giorgos Glykokokalos and Giorgos Krasanakis.

Addressing the attendees during the Anniversary Remembrance Service held on Saturday afternoon at the Martin Place Cenotaph, the Governor of NSW Margaret Beazley, highlighted the ties between Greeks and Australians.

“This is an opportunity to recognise and reaffirm the friendship of our peoples. The friendship based on the values of courage, sacrifice, mateship and filotimo – a Greek word that beautifully captures the feeling of pride for community, pride for family and pride for always doing the right thing.”

Ms Beazley congratulated the Joint Committee for the Commemoration of the Battle of Crete and The Greek Campaign for holding the service since the 1970s and for the opportunity to “share and remember history”.

Conveying a message from the Chief of Hellenic National Defense, Vice Admiral Drymousis thanked the Australian people for their sacrifice and “for what they have done for our country”.

“Our countries share the same global values of freedom, civilisation and peace,” he said.

Nearly 100 wreaths were laid on the day and the event concluded with the Australian and Greek National Anthems by The Royal Australian Naval Band Sydney and the choirs of All Saints Grammar, St Euphemia College, St Spyridon College; and the Maori Choir Group.