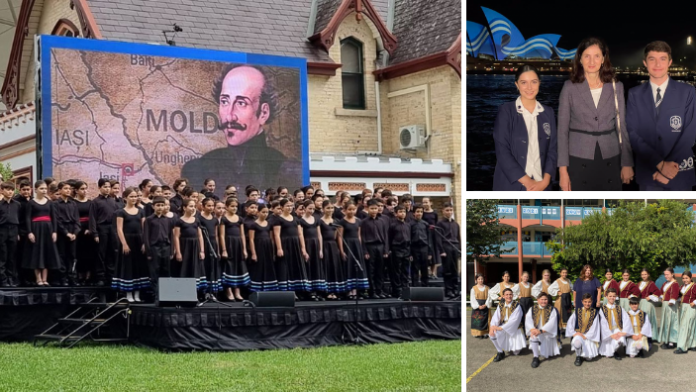 Last week was one of celebrations and commemorative events for the students of All Saints Grammar, St Spyridon College and St Euphemia College in Sydney, who strive to keep the Greek culture and history alive through traditional dances, poems and performances.

A school concert was held at All Saints College on Friday 26 March to mark the 200th Anniversary from the beginning of the Greek Revolution.

Through songs, music, dance and audiovisual media the school kids did a historical account of the events of the revolution and parents watched from home or work, as the production was live streamed.

Opening the event, Head of School, Mrs Elfa Lillis said that the school’s purpose is to “preserve and communicate the values of our cultural heritage and faith.”

“We mark this momentous occasion, the Revolution of 1821, and the feast of the Annunciation by coming together, to remember, to reflect on our history, and to give thanks for the hope for the future forged by the struggles of our ancestors,” Mrs Lillis said.

Official speeches were also given by His Grace Bishop Emilianos of Meloa, Sophie Cotsis MP, Consul General of Greece in Sydney Christos Karras, Mayor of the City of Canterbury-Bankstown Khal Asfour.

This year marks the 200-year anniversary of the Greek Revolution of 1821 and the Greek War of Independence against the Ottoman Empire which led to the establishment of the Modern Greek state. This historical event was not only of immense significance to the Greek people, but was also a key historical event in world history as the Hellenes were the first people to achieve full independence from the Ottoman Empire as a result of their 9-year struggle.

Through our programmed units of work, our young students (K-6) are exploring the concept of  Ελευθερία ή Θάνατος. Our Kindergarten students have been introduced by learning about Κρυφό Σχολειό, reciting Φεγγαράκι μου λαμπρό.

Year 1 is looking at the symbolism of the Greek flag and the heroism, glory and beauty of Greece through the reciting of the poem Η Ελλάδα στην καρδιά μου, and through looking at and dressing in the National costume of tσολιά και αμαλία. Through digital paintings and short texts, the students  of Years 2 – 6 have been learning about the bravery and determination of heroes and heroines of the Greek Revolution of 1821.  The λάβαρα another area of interest and symbolism.

Students in Years 5 and 6 exmaining Rigas Velestinlis’ or Pheraios’ War Song (Thourios) which inspired countless Hellenes in their struggle for liberation. Years 5 & 6 writing their own poetry based on this study. Year 6 students have been exploring the tragic events surrounding την Έξοδο του Μεσολογγίου through the theatrical play and poem Ένας Μεσολογγίτης.

Our young students have been enthusiastically participated and recognise the relevance and significance of the sacrifices of the Hellenes, as well as the contribution and support of Philhellenes worldwide. This old, strange, far away world of Ελευθερία ή Θάνατος has now been unlocked for our students who are beginning to discover the value and beauty of being a Greek Australian descendent of brave Orthodox Hellenes who were the first to manage to completely shake off Ottoman rule.

On Thursday, March 25, a number of the students from St Euphemia College represented the school at the official celebration of the bicentennial of Greek Independence Day at the Sydney Opera House.

This was followed by an appearance at Martin Place in Sydney, where students laid a wreath at the cenotaph to pay their respects to the heroes and heroines who lost their lives during the Greek Revolution.

On Tuesday, March 30, students also participated in a special assembly to commemorate the Greek ancestors who fought for Greece’s freedom and independence.

At the conclusion of the assembly, the students gathered in the playground, dancing and proudly waving their blue and white flags.