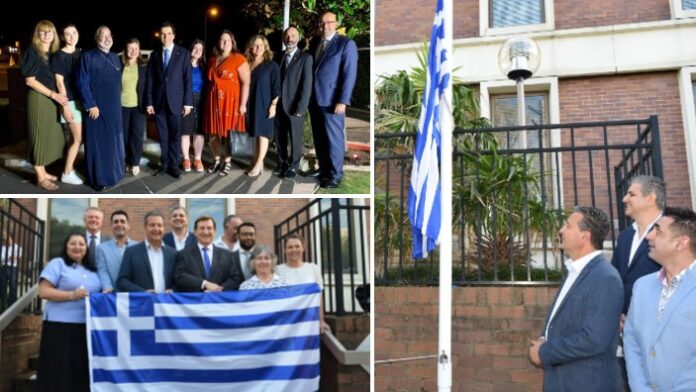 The Greek flag has been raised by the councils of Canterbury-Bankstown and Randwick to recognise the bicentenary of the Greek Revolution and the contribution of the Greek Australian community to their regions.

This is how the events went down.

To mark the 200th anniversary of Greece’s revolution and war of independence, the City of Canterbury Bankstown held an intimate flag raising ceremony on Wednesday night at Earlwood Senior Citizens Centre.

Present were Sophie Cotsis MP, member for Canterbury and the Consul General of Greece in Sydney, Mr Christos Karras, Fr Sotiris Drapaniotis as well as members of the community.

“It is important that we raise the flag today here in Earlwood due to many Greeks who live in this area,” said Mayor Khal Asfour opening the ceremony.

He said since the first Greeks arrived in 1829, Greek Australians now make up the seventh largest ethnic group in the country, with more than 22,000 calling Canterbury-Bankstown home.

“This is something we should all celebrate not only because you came to the country but because you have created a social fabric that it’s so important to all of us,” said the Mayor.

Sophie Cotsis expressed her gratitude to the council for organising the ceremony and referred to the motion she will move at the NSW Parliament on Thursday, along with other MPs of Greek background.

“It is important that we continue with our traditions and with the same passion to be free and be democratic. This is a very proud moment for all of us,” Ms Cotsis said.

Consul General of Greece in Sydney, Mr Christos Karras, said that the Greek Independence bicentenary is an opportunity to celebrate the common values that bind Greece and Australia.

In an intimate flag raising ceremony, Randwick City Mayor Danny Said met with some of Randwick’s local Greeks and spoke about how important the Greek contribution has been to the district’s development.

“It’s always started with the Castellorizians at Kingsford, I used to frequent the club most often, and we have a great history with St Spyridon Church and School,” Mayor Danny Said said to The Greek Herald.

All of Randwick’s councillors were in attendance of the ceremony, including Greek Australian Councillors Alexandra Luxford, Harry Stavrinos and Anthony Andrews.

Cr Luxford echoed the Mayor’s comments in highlighting how valuable the contribution of Greeks has been for Randwick, saying the flag raising ceremony is “the least they could do”.

“It’s a celebration of the Greek people that came to our community, to our city and contributed and this is for them. The Greeks played a big role in Randwick City in the early years so this is the least the city can do for them,” Cr Luxford said.

Cr Stavrinos said today is a day to remember to be proud of being Greek and celebrating “one of the richest cultures in the world”.

A small crowd gathered around the pole as the flag rose to the sound of the Greek national anthem, which echoed across the Randwick street.

“To me, Greek Independence Day is an important day in our culture, Cr Andrews said.

“But the most important thing is to continue the tradition of being Greek and encourage the young people of today to always remember this day as a symbolic day of the Greek people and we do this through out Greek schools, language, culture and dancing,.”

‘It’s in our blood’: Harry and Mario Kapoulas make their mark on the Cronulla food scene