Behind the scenes of the GOCSA Dance Academy ‘EPANASTASI’ spectacle rehearsal 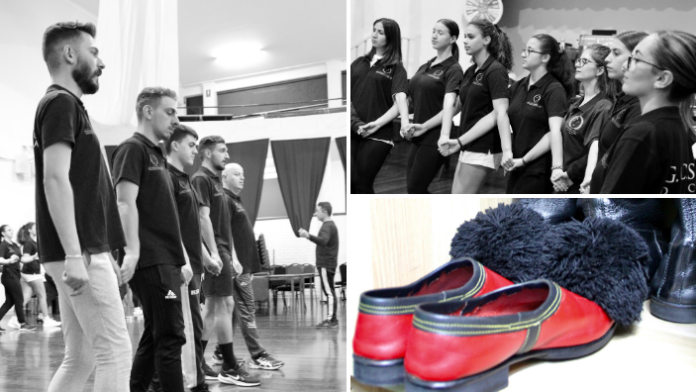 A crucial part of a live performance happens behind the scenes, both before a production is mounted and during its run.

Emotions, national pride and the will to keep the Greek history and culture alive and pass it on to the future generations of Greek Australians.

It is Wednesday evening and nearly 14,270 kms away from Athens, the heart of Greece beats in Adelaide’s Olympic Hall at Franklin Street.

Keep your chin up, feel the music in your heart, smile and focus on your steps. Basic principles all Greek folk dancers know well.

A group of the Greek Orthodox Community of SA (GOCSA) Dance Academy senior students led by dance teacher Yiannis Oikonomou, are rehearsing for their upcoming ‘EPANASTASI’ performance set to take place on May 8, at The University of Adelaide’s Scott Theatre.

Some had just finished work. Others, uni. Some have left their young children with yiayia and pappou, to join their Dance family. All of them second, third and fourth generation Greek Australians.

“The Academy’s nearly 90 students don’t just dance together. We are like a big family here,” says Coordinator Hellas Lucas.

Senior group students Anastasia Mavrides and Yiannoula Mavromatis, say they have formed strong relationships with other members of the group.

“I’ve been with the group since I was seven. When I was fifteen, I started helping with the younger groups and I have seen many of the kids growing up. It’s all about maintaining our culture and passing it on,” says Anastasia, 22, whose grandparents migrated to Australia from Chalkidiki.

“I love when they [the grandparents] come and watch our performances and feel proud of us,” she says.

Yiannoula Mavromati, 31, dances since she was four years old and has been with the group for seven years.

“I feel the dance in my soul. Dance is a form of expression for me. I am proud to be a Greek Australian.

“My pappou, Ioannis Tsolomitis, was an Evzon in Greece and I feel gratitude for our ancestors who fought for us to be free. We couldn’t have the opportunities we have without their sacrifice,” Yiannoula says.

Traditional Greek dancing has a primarily social function. It brings the community together. My feet are dancing too.

A journey to Independence through a cultural display of various art forms, including traditional song, music, dance, costume, and theatre. This is how GOCSA Dance Academy will commemorate the 200th Anniversary of the 1821 Greek Revolution.

“The youngest dancer in the performance will be three years old. Our costumes are all original and made in Greece and we will be joined by Melbourne-based folk band Omados along with local singers, Mellie Tantalos and siblings Sofia and Stamatis Dimitrakopoulos,” says Academy Dance teacher, Yiannis Oikonomou.

“Pame pali paidia, the end part of Pentozali,” Yianni instructs the boys of the group.

They have been dancing for almost two hours now but they are pressing on. The girls clap to encourage them.

Full of pride and happiness for my background and hopeful for the future. This is how I left this rehearsal and I can’t wait to see everyone on stage.