How the Greek community is assisting with bushfire relief 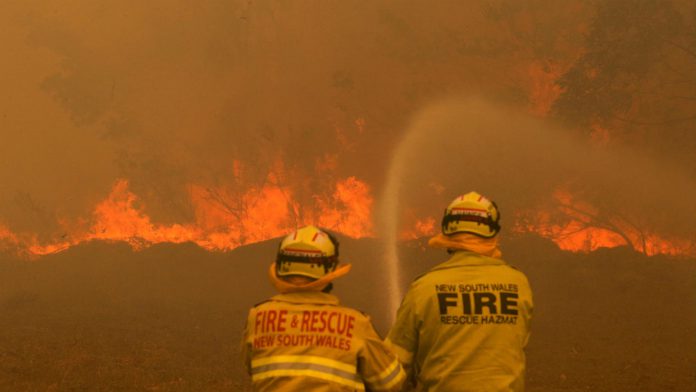 The entire Australian community have been shaken from this years bushfires, which is encouraging more and more people to get involved and assist with bushfire relief. Businesses and individuals across the Greek community are amongst those wanting to make a difference.

Here is a list of Greek businesses, community groups and individuals contributing to bushfire relief.

They are organising a series of events over the next two months aimed at helping firefighters and organisations involved in extinguishing fires in NSW.

“We call upon all Hellenism, known for its charity, to contribute to this effort, with its mighty, noble donation, to support our fellow humans affected by the recent deadly and devastating fires,” said the organisers.

Cheques will also be accepted to:

Haverick Meats, owned by the Andrews family, are the leading supplier of premium quality Australian meat to the Food Service Industry.

On Saturday January 11th, Haverick Meats will be donating 100% of their profits in stores to charities assisting with the bushfires, including NSW RFS, The Red Cross, The Salvation Army and Rural Aid.

Additionally, the Andrews family will personally match the profits made from this Saturday, to double the donation.

“Our country and our earth are in the grips of a severe climate crisis and we’re absolutely shattered at what’s been happening not only in the drought-ridden agricultural areas but now with bushfires ravaging so much of our land. We’re a proudly Australian-owned and operated business and we stand behind our country and our right to live in a thriving, beautiful country,” said Haverick Meats on social media.

Universal Hotels, owned by the Kospetas family, have also started their own bushfire appeal.

Each of their venues will have a donation box that patrons can contribute to, and the company will match every dollar that is donated.

Additionally, The Oxford Hotel will be donating 5% of all bar sales and Afters Sydney will donate 10% of all entry sales in January to the bushfire appeal.

Proceeds will be donated to the Red Cross, WIRES and the NSW RFS.

“Our heart goes out to everyone affected by the horrific bushfires that are currently ravaging our country,” said the organisation.

The Greek community of Belmore, together with the Greek Orthodox Archdiocese of Australia announced their participation in the ‘Side by Side: Our Community Standing with Yours Initiative, on Tuesday January 14th.

State Representative Tony Burke and local MPs Sophie Cotsis and Jihad Dib announced the initiative, which aims to promote and strengthen community actions in relieving residents of disaster-stricken areas. Particularly as a response to the bushfire tragedy that has affected thousands of Australian communities.

At the meeting, the Parish Priest of All Saints Church in Belmore, Very Rev. Archimandrite Apostolos Trifyllis, announced that the church had raised $8,500 on December 22nd to buy food for struggling farmers during the bushfire tragedy.

The food fundraiser filled a container, which was shipped last week, by a vehicle donated by Mr. Panagiotis Synadinos to Jervis Bay, with a distribution centre on the Parish-Community of St John.

The next fundraiser in line with the initiative will take place on January 24th, which will focus on collecting household items for bushfire victims.

The next fundraiser after that will be fundraising for schools affected by the bushfires.

Cretan Association of Sydney and NSW

The Cretan Association of Sydney and NSW is hosting a fundraising luncheon to support the Australian Bushfire Crisis Relief.

A $50 donation will be collected from each patron.

All Funds Collected will be donated to the Greek Orthodox Archdiocese of Australia Fire Appeal Fund.

You can secure your tickets HERE.

Where/When: The event will be held at The Cretan House, 57 Sydenham Road, Marrickville, at 2pm on Saturday 18 January 2020.

With the support of Martha Tsamis, Peter Kalliakoudis and Nick Missailidis, the Greek Community of Melbourne is organising a fundraiser for the bushfire victims on Friday, 17th of January, at Chasers.

“The Greek community is coming together, to do what it does best…support people where needed. We can all remember the massive fundraising event last year for the Mati fires, we are banding once again to support our fellow Australians,” says Bill Papastergiadis, President of the Greek Community of Melbourne.

The night will feature a super impressive line up of Greek Australian entertainers/musicians, including:

“As Greek Australians, our commitment to Australia is unwavering. We feel for our fellow Australians in this time of need and it is incumbent to assist in any way we can,” says Bill Papastergiadis.

Ginseng Hellenic, together with The Hellenic Club Woden hosted a sold-out fundraising dinner for the Australian Red Cross on Saturday 11th January.

“Ginseng Hellenic and The Hellenic Club Woden have been deeply touched by the tragic Australian bushfires in particular the South Coast. We simply cannot fathom the devastation being experienced by those who have been impacted by the fires across the country,” said a statement in the event page.

100% of the proceeds from the night were donated to the Australian Red Cross.

Tickets were priced at $70 each.

ACT Red Cross staff and volunteers were also present at the event.

Many people were to thank for the success of the event, including the Hellenic Club of Canberra for supplying beverages,  Farm Fresh, Fyshwick Markets for supplying fruit and vegetables, Bidfood who supplied prawns, Canberra Prosperous Mountain Dragon and Lion Dance who performed a lion dance performance, Gabrielle de Ramos for acoustic entertainment, and the front of house and kitchen work that was all contributed via volunteers who donated their time and skills.

Greek restaurant, Avli, which opened its doors in 2017 in the Penrith area, are hosting a free thank you dinner for all volunteer firefighters in the Penrith Valley and Hawkesbury Region.

The event will take place on Thursday, 16th Feburary 2020.

“As all our communities are coming together to help support all those who have helped and lost with the terrible fires, Avli also wants to do their part to give back,” said Avli Restaurant owners.

Popular online clothing brand, Babyboo fashion, which is owned by young Greek-Australian woman, Argylica Conditsis, donated 100% of their profits for a 24 hour period to bushfire relief.

“I am immensely proud and honoured to be leading a company that has pledged to provide support through a donation of 100% of our @babyboofashion profits made within the next day. My heart bleeds for everyone affected,” said Argylica.

Billy and the team from Billy’s Bar Espresso have been donating $1 from every cup of coffee sold to Australian Bushfire Relief. This initiative began at the beginning of this week and will finish on Sunday January 12th.

“In this time of need we encourage everyone to do what they can to help. From everyone here at Billy’s we say thank you and stay safe,” they said.

The Greek diner in South Australia is donating $1 from every coffee sold this week to the Kangaroo Island Mayoral Relief and Recovery Bushfire Fund.

There are also collection tins on the counter you can contribute to.

Pontoxeniteas will be donating Gift Cards to the community of Balmoral Village, this Saturday 11th January.

All the giftcards will be left with the Balmoral Village RFS.

Maria Anthony and executive committee will also be cooking lunch for everyone at the Balmoral Village RFS on the day.

“A gift card of any amount will be appreciated, and it will directly assist the families that have lost their homes. It can be used to help with school supplies, food, clothes and can be used within 2 years,” said committee member Maria Anthony.

Gift card drop offs will be accepted any time before Saturday, January 11th, at 9am.

Gift card drop offs will be accepted in Earlwood and anyone requesting further details is encouraged to contact Maria Anthony.

Peter Sinodinos, owner of Defi II nightclub and CEO of a successful transport and logistics company, is collecting items to transport, organise and distribute items directly to bushfire victims and fire brigades.

No money is being collected through this drive, only items.

Items can be dropped off at:

His first delivery will be on Saturday January 11th.

“I believe we as Greeks owe this to this country and that if we all got together we could really make a difference,” he said.

Peter Papoulidis of the Trireme Group has been cooking and serving imported Greek goods and pastries to the firefighters of the Southern Highlands.

“I just felt the need to do my little bit. I knew I had a product that would be appreciated, as it can be consumed at room temperature and extremely versatile for the needs of firefighters,” says Peter.

Peter would like to thank everyone that helped him throughout the summer including his supplier Hudson’s Pacific, who donated one dollar for every dollar worth of stock ordered once they realised what the stock was used for.

Delphi Bank, together with their parent company Bendigo Bank, launched a national Bushfire Disaster Appeal in partnership with The Salvation Army Australia to help those devastated by bushfires across Australia.

So far, they have collected 18 million dollars for bushfire relief through generous donations.

One hundred percent of funds donated to the Bushfire Disaster Appeal will be directed to communities affected across the country.

Donations can be made at any Bendigo Bank branch or online.

Bank of Sydney have provided financial support to WIRES, The Salvation Army, NSW RFS, VIC CFA, The Red Cross and the RSPCA.

They have also encouraged all their followers to contribute to these causes.

Additionally, Bank of Sydney customers who have been affected by the fires have been encouraged to contact the bank directly on 1300 226 546.

Bushfire victims may be eligible for the hardship assistance program. More information is available HERE.