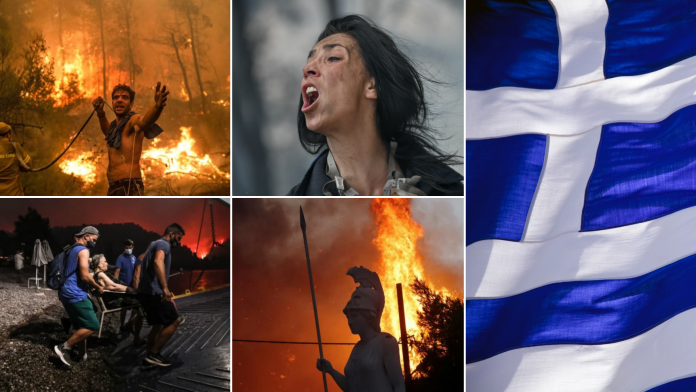 Devastating and uncontrollable fires have ravaged Greece over the last week due to the worst heatwave experienced in the country since 1987.

Thousands of people have been displaced, properties and livestock have been destroyed and cities, villages and outlying settlements have been consumed by wildfires.

So far there has been one death of a 38-year-old firefighter after he sustained a head injury from a falling utility pole in Ippokrateios Politeia, one of the neighbourhoods north of Athens affected by fire.

It’s clear the danger is far from over and in response, Greek diaspora in Australia and across the world have united to raise funds to help those fighting fires in their homeland.

Here are just a few of the fundraising initiatives you can look into:

In 2018, during the devastating fires in Attiki, Melbourne’s Greek community came together and raised funds to support the Hellenic Volunteer Fire Fighting Association (HVFFA). Every cent of the money that was raised in 2018 was spent by the HVFFA on the purchase of much needed protective equipment for the firefighters.

This year, Melbourne’s Greek community has once again called on people to rally as one and alongside its collective heartfelt wishes and prayers, to also dig deep and donate funds that will once again be directed to the HVFFA.

Community organisations, businesses and individuals can all contribute to this drive simply by making a donation via either:

1. The Go Fund Me campaign we have established for the campaign https://gofund.me/e071edf0; or

This initiative has been supported and endorsed by various Greek community organisations around Australia including The Greek Herald.

The Greek Orthodox Archdiocese of Australia has also initiated a fundraiser to collect money to send to Greece to financially support those affected by the fires.

The fundraising initiative will be undertaken either by directly depositing into a bank account or going through gofundme.com with the following details:

In his message announcing the fundraiser, His Eminence Archbishop Makarios of Australia stressed that his thoughts are with everyone suffering in Greece at the moment and he encouraged his flock in Australia to offer support if possible.

“I am fully aware that our people, like almost everyone in Australia, are currently experiencing another difficult trial, that of the pandemic and the adverse economic effects as a result of the restrictions,” Archbishop Makarios said in his message.

“However, inspired by the example of our forebears who always offered a place at their table to a person in need, both when it was richly laden with goods and when meagre, I am convinced that we will be able to rise to the sacred challenge of helping our fire-affected brethren, by each one of us contributing either from their surplus or privation.”

The Hellenic Initiative (THI) is a global, nonprofit, secular institution mobilising the Greek diaspora and Philhellenes to invest in the future of Greece together.

In response to the raging wildfires in the country at the moment, THI launched its Wildfire Relief Campaign to help firefighters, first responders and their vetted non-profit organisations working to save Greece.

So far, THI has already raised over $100,000 with 100% of the funds raised going towards the relief effort.

Following the huge mobilization of the Hellenic Red Cross (HRC) for the extensive destruction caused by the large-scale fires in Greece, they decided to open a bank account to support the fire victims and the homeless animals, in order to raise as much money as possible.

Those who wish to contribute financially are kindly requested to deposit their donations in the following bank account:

All deposits must be marked “Wildfires.” For more information you can call: 210 36 09 825 or visit the website of the Hellenic Red Cross www.redcross.gr.

They are also collecting food at two warehouses in Greece.

Friends of the Strays of Greece:

As evident by many of the photos coming out of Greece, animals have also been significantly impacted by the current bushfires raging across the country.

In response, Friends of the Strays of Greece have asked for donations.

The donations can be made direct to them by referencing FIRE, and these will be distributed to those most in need as soon as the damage assessments are available.

If you log into PayPal and look them up via email info@straysofgreece.org or name ‘Friends of the Strays of Greece,’ you are able to reference FIRE when donating.