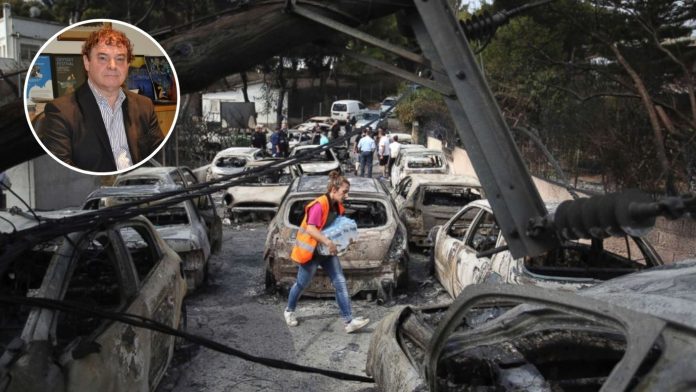 The Chair of the “Greek Fire Appeal 2018” Organising Committee, Bill Gonis, has issued a letter to members providing a update on the current status of funds raised during the period of the terrible Mati bushfires in Greece.

The Committee was established in 2018 under the auspices of the Greek Orthodox Community of SA and includes a wide membership of people who represent various Community Associations, as well as leaders from business and other areas.

According to the letter, all the funds raised at the time were “donated to the Mati Greek Fire Appeal” and “banked and invested with the Commonwealth, Delphi, and Sydney Banks.”

“In October 2018, the Greek Fire Appeal Committee allocated a substantial amount of money from the funds raised, to purchase specialised skin grafting medical equipment in South Australia, which was shipped and donated to the General Hospital in Magoula Athens, to assist with the treatment of the fire victims at the Burns Unit of this hospital,” Mr Gonis wrote in the update.

Since then, Mr Gonis said, the Committee has made several contacts with various authorities in Greece with a view of funding a project with the balance of the money held in our bank accounts.

“In March 2019 it was drawn to our attention that 20 Officials, including the Mayors of Attica, Rafina, Marathon and others, were charged for the responsibility of the fires,” Mr Gonis said.

“In September 2019, a Member of the SA Parliament travelled to Greece and met with various authorities in Attica and Mati to explore the possibility of establishing an appropriate project for the benefit of the families of the fire victims, in line with the Committee’s objectives.

“On his return from Greece, in January 2020 the Member of Parliament presented a written report to the Committee, which has been carefully considered.”

Mr Gonis said after this report was reviewed, the COVID-19 pandemic was announced and this made communications with various authorities in Greece difficult.

That is until February 2021 when, according to the letter, the Committee sought the assistance of the Consul General of Greece in South Australia in furthering their objectives.

“[The Committee] is continuing to pursue its goal in allocating the funds raised during the appeal to a worthy project, this fulfilling the due diligence obligation for the acquittal of the money donated by the public.”

Mr Gonis concluded the update with his signature and a note that “everyone will be kept informed on any further developments.”