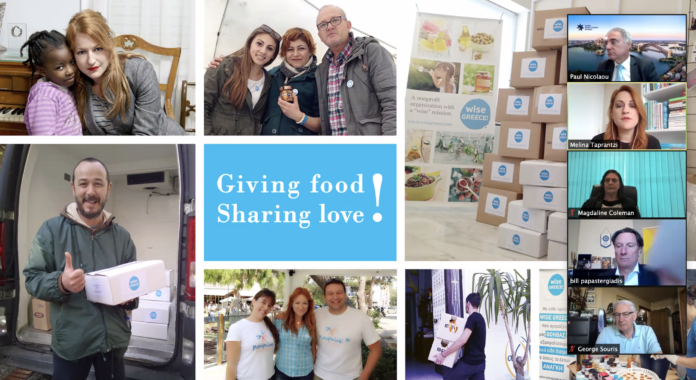 More than three million Greeks live below the European poverty line. Nearly 700,000 children up to the age of ten don’t have enough money to buy a snack at school and 500,000 people currently depend on soup kitchens for their daily meals.

These were some of the revealing data presented by Social Entrepreneur and Founder of Wise Greece, Melina Taprantzi during the first Greek Australian Dialogue Series online conference for 2021, organised by the Director of the Australian Chamber of Commerce and Industry Mr. Paul Nicolaou.

In attendance were people from across Australia, among them former member of the New South Wales Legislative Assembly and former leader of the National Party in NSW, George Souris. The opening and closing statement for the evening were provided by Board member of HACCI NT, Magdaline Coleman and President of the Greek Community of Melbourne, Bill Papastergiadis respectively.

‘Trying to prove Greece is Wise’

“For the past seven years I’ve been trying to prove that Greece is wise,” said Social Entrepreneur and Founder of Wise Greece Ms Taprantzi, explaining how the idea for the social enterprise came about.

“We started in 2013 when people in Greece were searching in bins to find a decent meal. We were in the middle of the worst financial crisis that Greece has faced in its modern history and unfortunately now we have another crisis to face,” she said.

The organisation has received multiple prestigious awards and in late last year, Taprantzi was honoured with the SDGs and Her award, as one of the 7 women worldwide, whose activity significantly contributes to the achievement of the Global Sustainability Agenda 2030.

An organisation with a double mission

“At Wise Greece we have products from small food producers from all over Greece. We sell their products in various stores in Greece and abroad and we turn our profit from the sales into food supplies for people in need,” Ms Taprantzi said explaining the organisation’s purpose.

“We have a double mission. We help small family owned- businesses, which are the backbone of Greek economy while providing high quality food supply to orphanages, soup kitchens and to Greeks who live under the poverty line.

“Greece doesn’t only produce olive oil, olives and honey anymore,” Ms Taprantzi said, explaining how social enterprises can be a viable way of doing business while giving back to society.

“We have managed to create a sustainable business model that can actually work. Greek producers need hope especially due to this ongoing crisis and this is what we are trying to do,” she concluded.