From stolen Parthenon Marbles to the Olympics: Two authors set to discuss their novels 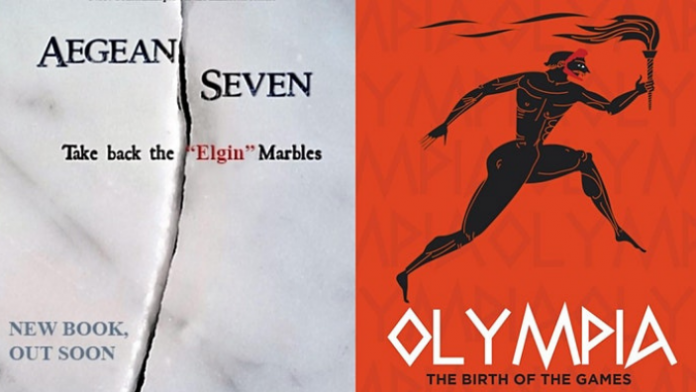 On Wednesday May 11, Billy Cotsis will launch his new book, The Aegean Seven Take Back the Marbles, an historical fiction set around the theft of the Marbles by Thomas Bruce, aka the Ambassador to the Ottoman Empire, and some of his henchmen and henchwomen! This is Cotsis’ sixth book and he will also preview one of his Southern Italy Greko/Griko documentaries on the big screen.

Sitting alongside him is Melbourne academic and a former aspiring military officer, Dr John Martino. Dr Martino will make the special journey up to Sydney to present, Olympia: The Birth of the Games.

The two authors will deliver a vivid sense of what has occurred with two key, internationally significant and often controversial aspects of Greek history across thousands of years (within the space of just 1 hour or so).

These are two distinctly (and powerfully) Greek epic stories, of compelling interest to both Greek-Australian and international audiences.

Each author – with both being widely published, very well travelled and bi-lingual – has already established an illuminating literary platform for their accounts of Hellenic history. The intention with this unique presentation is to take two of the most important aspects of Greek antiquity – the Olympics and the marbles of the Parthenon – as presented within these historical fiction novels and build a much broader appreciation of the significance and controversies they represent within the modern age.

Dr Martino advised, “with its strong Greek community, as well as polyglot international flavour (and well educated and travelled general population), Sydney – and the Festival in particular – is an ideal platform to project a deeper understanding of the undying significance of Greek culture to the modern world: from the glories of Olympia to the manifold splendours of the Parthenon, and how both ‘institutions’ remain crucial to understanding a Western (and beyond) sense of identity.

Moreover, the ‘Aegean Seven’ presentation will provide an actual book launch platform for his work; while ‘Olympia: The Birth of the Games’ will have moved from hardcover edition to a softback edition at that juncture, so both works will be introducing something quite special to Sydney at the Greek Festival.

Dr Martino from Melbourne (of Greek and Italian heritage) and the other from Sydney (of Greek heritage) will speak about two unique novels that take us from the birth of the ancient Olympic Games to the stolen Parthenon Marbles.

Each author will discuss what their novel means both within and beyond Hellenic history.

Dr Martino says, “We want the audience to walk away with a fresh understanding of the significance of Olympia, and the most watched sporting event on the planet; as well as a deeper appreciation of the Parthenon, who stole the Marbles and how Greece is fighting to regain them.”

Cotsis explains, “we both have a sense of humour and we want people to think about these significant elements of Greek history. People need to remember why and how the Games came about, especially when you think about the illegal war raging in Ukraine.  The Games were meant to be a pause on conflicts, whereas sadly, the war we now see took place straight after the Winter Games, ironically.”

“I created a number of characters, six Greeks including Melina, from all over the Greek world ie Greko Calabria, Constantinople, Marseilles, Smyrna and I connect these characters to Lord Byron. The characters are not real, except Lord Byron, and they take on an adventure across the Greek world and Europe to try steal back the Marbles in an era of European wars and the looming Greek Revolution. Some of the periphery characters are real such as a Romanian Greek prince and Laskarina Bouboulina. I want people to read and get motivated to learn more and join some of the committees worldwide and in Australia that seek to have the Parthenon Marbles returned to the Athens. These people work hard and need your support to help return the Marbles to where they belong.”

50% of book sales on the night from The Aegean Seven will go to the Greko in Calabria, where Cotsis will visit again this year.

Both authors want to thank the Chair, Nia Karteris and the organising committee for allowing them to launch the book as part of the 40th Greek Festival. Cotsis explains, “the Festival is special and the way the Cultural Program is supported, it’s a huge bonus for creatives such as John and myself. We are pleased to take part and as I am from Lesvos, I am honoured to be at Mytilenean House, my favourite clubhouse in Australia, and supported by the wonderful Mytilenean Brotherhood.

Launch will take place on Wednesday 11 May at Mytilenean House, 225 Canterbury Road, Canterbury at 6.45 pm with the legendary Tassos Bouzouki, of Lemnian heritage, providing some early entertainment.

Entry is free and light catering is included.

*Billy Cotsis is at the Pallaconian Brotherhood, Brunswick with Dr Martino this Sunday for the world premier of Magna Graecia: The Greko of Calabria at 6.00 pm.